Security beefed up across the country for Tuesday's processions

Security beefed up across the country for Tuesday's processions 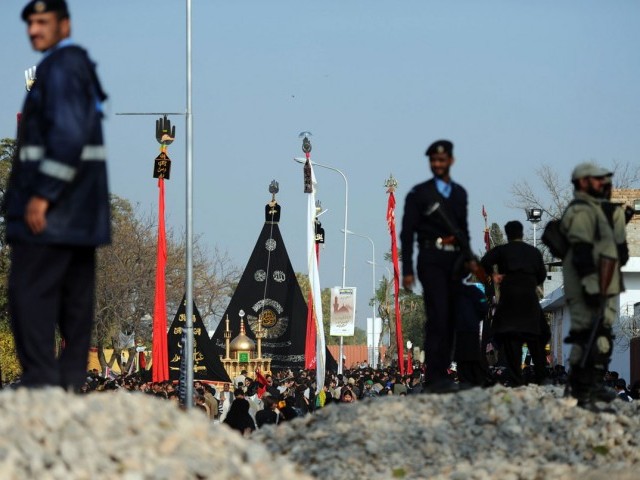 Police and military personnel keep watch as mourners take part in a religious procession in Islamabad on December 23, 2013. PHOTO: AFP

RAWALPINDI: Army units have started to take control of security at entry and exit points of all major Imam Bargahs in Rawalpindi, along with mobilisation of troops in other parts of the country to boost security where needed, ahead of scheduled Chehlum processions in the country, Express News reported.

The measures come after riots in Rawalpindi in November which saw at least 10 people killed and a number of buildings torched and a subsequent curfew being imposed.

Express News correspondent Imran Asghar reported that many roads in Rawalpindi had been sealed and heavy contingents of police and other law enforcing agencies are patrolling as part of the 7,000 police, and 10 companies of Rangers and Army units deployment in the city.

Despite the blocking of many roads and streets, the Islamabad Highway, Airport Road have been kept open.

Asghar reported that while security has been considerably beefed, curfew is considered only as a last resort by the district administration.

While the Ashura processions had culminated without incident in Karachi, the government has restricted pillion riding in Sindh for a day.

Army units have also been mobilised in the province.

Around 4,000 to 5,000 army personnel will remain on standby in the province as a part of the security plan. In Karachi they will supplement the deployed units of police and Rangers.

In some parts of interior Sindh, including in Pannu Aqil, the army has taken over charge of security.

The city of Saints, which saw widespread rioting following Ashura violence, has seen stringent security measures enacted for Chehlum processions scheduled to be taken out on Tuesday.

Pillion riding has been banned in the city for the day while cellular services will also be suspended.

In lieu of the security situation, the city will be sealed.

Unlike other parts of the country where a blanket day-long ban on cellular operation is being imposed, Peshawar is opting to install mobile jammers along the procession route.

The route will also be swept using bomb disposal squads.