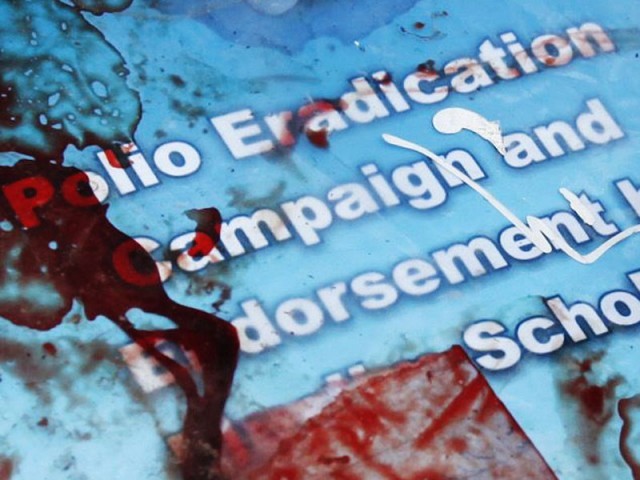 JAMRUD: The supervisor of an anti-polio vaccinations campaign in Jamrud tehsil was gunned down by unknown militants in his office on Saturday morning.

An official of the political administration Asmatullah Wazir said two masked militants on motorbikes parked barged into the supervisor Ghilaf Khan’s office and told the women and children present to leave.

“The women and children ran away and vacated the office,” he explained.

The official added that one of the militants opened fire at the supervisor and then managed to escape. Residents of the area rushed the injured to the Jamrud Civil Hospital where he succumbed to his injuries.

Wazir also added that the militants left a note threatening the polio workers of the same fate as the supervisor.

The supervisor has been working in his office at Expanded Program of Immunization (EPI) in Ghundai area when he was targeted.

A search operation was launched in the area all routes in and out of it were blocked by khasadar officials.

On December 13, Pakistan Tehreek-e-Insaaf Chairman Imran Khan had decided to kick off a campaign against polio, as terrorists continued their attacks on polio teams in the tribal areas. PTI leaders said it would be an attempt to boost the morale of polio workers who are constantly facing threats to their lives.

Imran Khan had termed termed those who kill polio workers and police officials “anti-state elements and enemies of the nation.”

His decision came on the same day that two police officers and one polio worker were shot dead in separate incidents. In the first incident, two officers providing security to a polio team were killed when unidentified men opened fire at them in Swabi.

In another incident, a Ward Boy at Civil Hospital Jamrud was gunned down by unknown militants when he was administering anti-polio drops to minors in Naye Abadi area of  Jamrud.

On November 26, the teachers kidnapped for assisting an ongoing anti-polio drive in Khyber Agency were set free. Seven teachers had been kidnapped on November 21 for allegedly allowing polio vaccination teams inside a private school in Bara tehsil.

On October 10, three khasadar officials of Khyber Agency, who were providing security to polio vaccinators, sustained injuries when a roadside bomb targeted their vehicle on Ring Road near Achini in Peshawar.

Earlier, two people were killed and over a dozen – including two polio workers – were injured in a bomb blast outside a dispensary in a village on the edge of Peshawar on October 7. They were scheduled to finalise security arrangements for the ongoing polio vaccination campaign in the area.

Two polio volunteers were also killed in Tapaini, Swabi on June 16. The two men were administering drops to children in the area.

On January 29, a police constable escorting polio workers was shot dead in Gullo Dheri, Swabi. On the same day in the neighbouring district of Mardan, a man took an axe to a lady health worker’s brother who was accompanying her for protection during the anti-polio drive; the brother was injured.