Play ‘Dhuwaa­n’ was perfor­med at a truck on the beach on Sunday aftern­oon.
By Our Correspondent
Published: December 16, 2013
Tweet Email 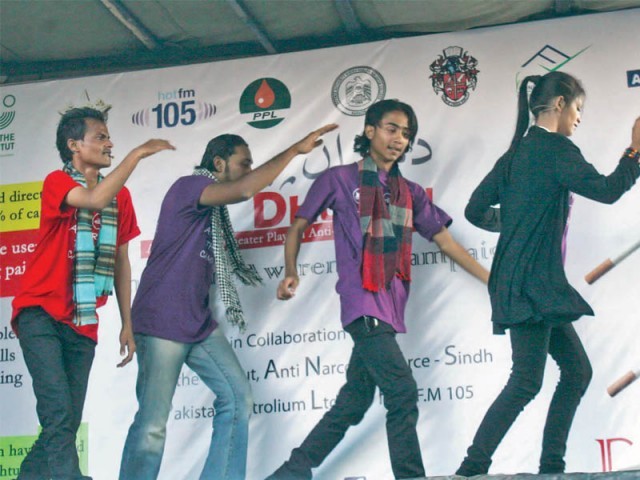 Thespianz Theatre performed their play ‘Dhuwaan’ that aims to create awareness about the harms of using drugs at Sea View on Sunday. PHOTO: ATHAR KHAN/EXPRESS

KARACHI: If you happened to be at Sea View on Sunday afternoon, you may have caught the exciting performance of Thespianz Theatre’s play against drugs, ‘Dhuwaan’.

The performers used their breath-taking dance moves and melodious beats to entertain a small crowd that had gathered outside Floating Ship along the beach. The dance performance and the play were part of the inauguration ceremony of Anti-Drugs Theatre Awareness Campaign of Thespianz Theater and Anti-Narcotics Force-Sindh.

The campaign, which aims to create awareness among young men and women about the effects of drugs on health, will continue till the end of this week. The same performers will be making stops at various landmarks across Karachi.

The performers of ‘Dhuwaan’ tried to show the troubles that emerge from drugs’ addiction. The play shows how people of every age and gender can become addicted to drugs and how the drugs ruin their socio-economic life.

It’s a story of a young, frustrated boy who failed to get his desired marks in his exams. One morning, he wakes up and starts looking for his pack of cigarettes when one of his friends joins him and offers him hashish. Soon after, the boy becomes addicted – the drug weakens his lungs.

The play also shows the lives of drug addicts as they lie on roadsides, their domestic lives in which they fight with their wives and children, as an addicted father was unable to do any job to make money. It also shed light on the lives of the elite class of drug addicts and those who take drugs during their university days.

Anti-Narcotics Force Sindh Chief Brigadier Abuzar, who was the chief guest, told The Express Tribune that they are planning to launch a campaign against drugs across the province, where they will create awareness through healthy activities. Due to strict checking at all the entrances and exits of the city, the smugglers have stopped using Karachi for their business activities, he said. “We should promote such activities to save our youngsters from falling into the mouth of death,” he said.

Comedian and host, Faisal Qazi, vowed to quit smoking at the occasion and threw away his cigarette packet. “Drug addiction is more common among youth, they take anti-sleeping pills to stay awake all night to chat with their friends and then they sleep during classes,” pointed out Faisal Malik, the chairperson of Thespianz Theatre.

“Drugs, Aids and alcohol are challenges for our young generation and we need to educate them on these issues,” said Goethe-Institute director Dr Manuel Negwer, who is one of the campaign partners. “Theater can play a good role in creating awareness.”

According to Malik, the shows taking place during this week are free for all.

Ready for duty: SIUT to award 250 BSc degrees on December 18