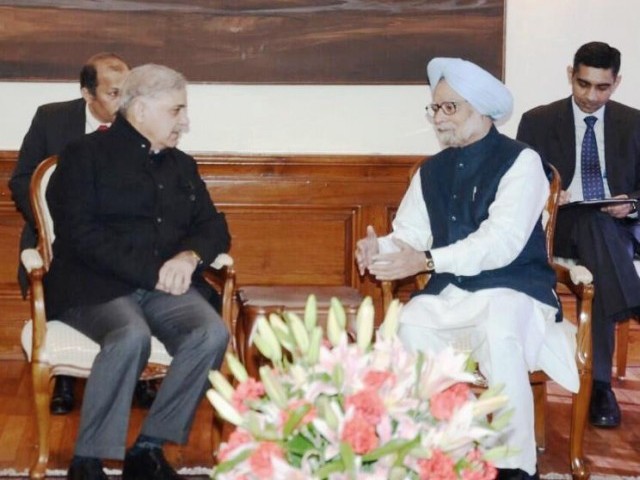 Shahbaz arrived in Delhi today on the invitation of his Punjab counterpart in India, Parkash Singh Badal.

The Punjab CM, who launched the much lauded and somewhat controversial Metro Bus Service in Lahore made it a point to visit the Patel Chowk Metro station. After riding the metro, Shahbaz said he had a great time and said the service was of great benefit to travelers.

In his meeting with Manmohan Singh, the CM said India and Pakistan could combat poverty if both sides resolved their differences.

He extended an invitation to Singh from Nawaz Sharif to visit Pakistan and his village, a source said.

Shahbaz Sharif “delivered a message of goodwill from Prime Minister Nawaz Sharif while emphasising Pakistan’s desire to forge friendly and cooperative relations with India, in the interest of peace and prosperity of the people of the two countries and of the region”, said a Pakistan High Commission statement.

The Pakistan Punjab Chief Minister also underscored the importance of resumption of dialogue and peaceful resolution of all issues.

Keen to ease the power situation in his state, Shahbaz would be visiting the Timarpur-Okhla Solid Waste Management Project in Jasola and the New Delhi Mahatma Gandhi Thermal Power Plant, Jhajjar, village Khanpur Kalan, according to the Pakistan High Commission.

He is slated to be the chief guest at the World Kabaddi Championship final in Ludhiana on Saturday.