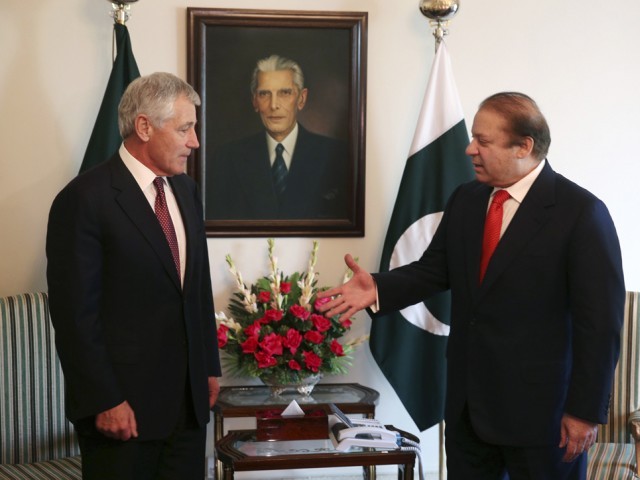 US Defence Secretary Chuck Hagel warned Pakistani leaders on Monday that if they did not resolve protests stalling some military shipments across the border into Afghanistan, it could be difficult to maintain political support in Washington for an aid programme that has sent billions of dollars to Islamabad, defence officials said.

In response, Hagel received assurances from Prime Minister Nawaz Sharif that his administration would take ‘immediate action’ to resolve the shipment problem, sources told The Express Tribune. He assured the visiting Pentagon chief that the situation would improve soon and Pakistan would ensure smooth exit of foreign forces from Afghanistan.

An official statement issued from the prime minister’s office didn’t say the issue was discussed in Hagel’s meeting with Nawaz. However, the US Embassy in Islamabad confirmed that the Pentagon  chief conveyed Washington’s concerns. “Secretary Hagel raised the importance of keeping the ground supply routes out of Afghanistan open,” the embassy said in a statement.

Since 2002, Pakistan has received more than $16 billion of security assistance and reimbursements, according to the US Embassy. Pakistan’s determined effort to root out terrorism and militancy on its own territory is essential for creating a stable environment for promoting economic growth and prosperity, it said.

The key supply line at Torkham border has been blocked by Pakistan Tehreek-e-Insaf, the ruling party in Khyber-Pakhtunkhwa, since November 24 in protest against the CIA-led drone campaign in the tribal areas. Just last week, the US stopped the shipments from Torkham due to worries about the safety of the truckers.

The Associated Press quoted the defence officials as saying that Hagel described a political reality on Capitol Hill that could complicate support for the billions of dollars of aid Pakistan now receives. It was Hagel’s intent to try and pre-empt any problems with the aid, said the officials who spoke to reporters in the Saudi capital of Riyadh on condition of anonymity because they were not authorised to discuss the private meetings publicly on the record.

The US defence secretary had a whirlwind tour of Pakistan in a move to further repair what has been a strained and sputtering relationship between Washington and Islamabad. Interestingly, he refused to commit an end to the controversial drone campaign in the tribal regions, sources said.

The Pakistani leader conveyed his country’s concerns over US drone strikes, stressing that “drone strikes were counter-productive to our efforts to combat terrorism and extremism on an enduring basis”, says the statement from the PM office.

However, Hagel was noncommittal. He said the Obama administration was confident that the CIA, which operates remotely-piloted aircraft, has yet to take out some high-value targets in the tribal regions, sources told The Express Tribune.

Unsurprisingly, the US Embassy didn’t say the drone issue was discussed in the Hagel-Nawaz meeting. It only said that the Pentagon chief’s trip was an opportunity to advance a broad, robust, and continuous Pak-US dialogue on topics of shared concern, including security and stability in the region.

Secretary Hagel and the Premier Nawaz agreed to work together to strengthen Pak-US relations and advance the shared interest of a stable, secure and prosperous Pakistan and the region. They reaffirmed the importance of Pak-US strategic partnership for peace and stability in the region.

They noted the substantial progress made in the bilateral relationship in recent months and acknowledged that the recent high-level exchanges, including the prime minister’s visit to Washington, meetings of the Working Groups on Energy, Defence and Security, Non-proliferation and Disarmament, have greatly helped in building trust and strengthening the relationship.

The two leaders also reviewed the current state of bilateral defence and security cooperation and explored ways for further expanding cooperation in this important area of the relationship. In this regard, the prime minister stressed the importance of establishing long-term and broad-based defence cooperation with the US on the basis of mutual interest.

Secretary Hagel acknowledged Pakistan’s efforts for an inclusive reconciliation process in Afghanistan. The premier assured the visiting American leader that his country would extend every possible support for stability in the region. “Pakistan would continue to play its role for peace and stability in Afghanistan.”

Hagel said US assistance to Pakistan continues to help build the counter-insurgency and counter-terrorism capabilities of Pakistan’s security forces, which are critical to countering violence in the western border regions.

The US defence secretary also met with the new army chief General Raheel Sharif at the General Headquarters in Rawalpindi. Hagel is the first high-ranking US official to meet with the army chief, who took over following the retirement of his predecessor Gen Ashfaq Parvez Kayani late last month.