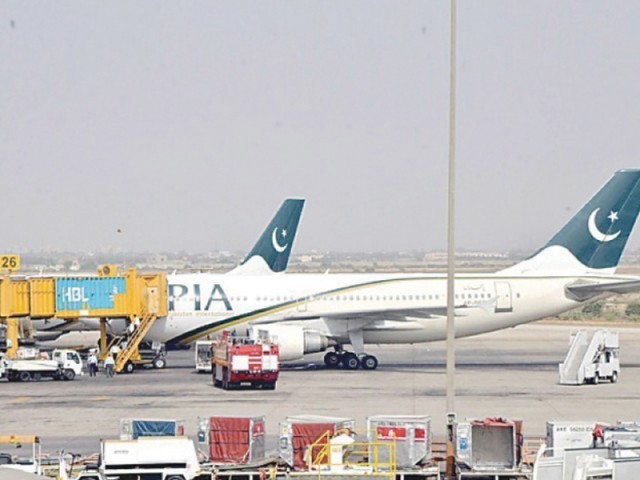 The ECC approved guarantees for borrowing $150 million from Exim Bank of US and Islamic Corporation of Insurance and Export Credit (ICIEC) for servicing and repair of nine Boeing 777 aircraft. PHOTO: FILE

The government has approved a Pakistan International Airlines’ request for acquiring five European-made aircraft on lease aimed at cutting financial losses of the state-run carrier whose accumulative losses have shot up to Rs267.8 billion.

The decision was taken here on Tuesday by the Economic Coordination Committee (ECC) of the cabinet, headed by Finance Minister Ishaq Dar.

However, the ECC turned down PIA’s request for another five aircraft that the national flag carrier also wanted to acquire on lease.

It approved sovereign guarantees for obtaining a loan of $150 million for repairing Boeing 777 aircraft and extended existing guarantees of Rs33.5 billion until the end of current financial year in June 2014.

The PIA management had shortlisted 10 A-319 and A-320 aircraft based on their combined score according to their financial and technical parameters. According to a handout issued by the Ministry of Finance, the lease of the remaining five aircraft was rejected because of their low combined score.

PIA emphasises that it needs at least 10 airplanes to prop up revenues and cut financial losses. Its board of directors has approved acquisition of six Airbus 320 and four A-319 aircraft on dry lease.

According to the third quarter results, the air carrier’s liabilities have increased to Rs267.8 billion by the end of September this year. Minister of State for Privatisation Khurram Dastgir Khan has said the corporation is causing the government a loss of around Rs36 billion per annum.

Gardezi, who is also acting chairman of PIA, is facing criticism for allegedly promoting his relatives in the airline. Nepotism remains one of the major reasons behind the troubles faced by the airline coupled with corruption and political appointments.

The ECC directed that the lease period of the four aircraft earlier acquired on wet lease may be extended so that a pool of at least 10 aircraft could be maintained. It also authorised PIA to initiate the bidding for five additional aircraft which may be inducted by June 15, 2014.

The finance minister observed that the lease of aircraft would not only restore PIA’s international credibility, but would also improve its image.

The aviation secretary said after approval of a Rs16 billion bailout package in July this year PIA had been able to add six aircraft to its fleet, which increased the number of operational airplanes to 26. This, he said, improved flight schedule and no complaints of delay were reported during Hajj operations, which ran smoothly after many years.

The ECC approved guarantees for borrowing $150 million from Exim Bank of US and Islamic Corporation of Insurance and Export Credit (ICIEC) for servicing and repair of nine Boeing 777 aircraft. However, the guarantees depend on clearance of financing terms by the Finance Division.

The ECC also extended the validity of existing guarantees for PIA’s term loans of Rs33.5 billion until June 30, 2014. It directed that these term loans should be converted into term finance certificates in order to retire the guarantees.

The ECC expressed concern over media reports about increase in prices of essential commodities. The Consumer Price Index rose 10.9% in November over the comparative period of last year as inflation returned to double digits after a gap of 16 months.

The ECC told the provincial governments to strengthen monitoring of prices and check hoarding and profiteering. It expressed the hope that the provinces would share information and follow best practices to provide relief to the common man in maintaining fair prices of essential commodities.