Gangs of Mehmoodabad: Chanesar Goth may be the next Lyari

Gangs of Mehmoodabad: Chanesar Goth may be the next Lyari 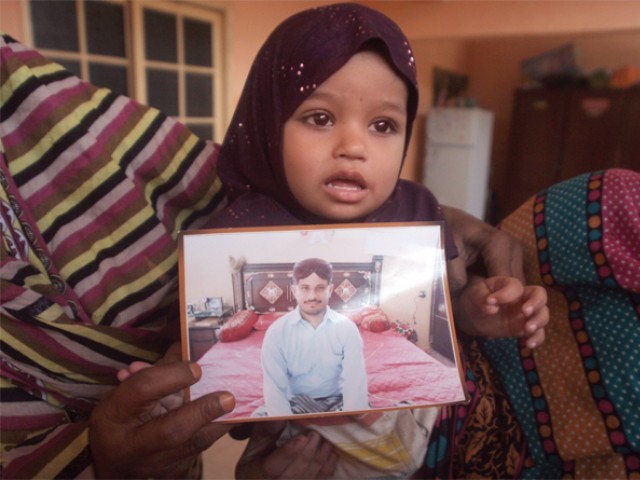 Until three months ago, Maimuna and Ghulam Rasool were happily married and life in their humble Chanesar Goth quarters was simple. With their two-year wedding anniversary around the corner, the couple began to talk about starting a family.

The two had dreams of fussing over babies as they returned from school, and even some certainty of their career choices: doctor, teacher, police. These plans were shot down, however, when Rasool was killed in a drive-by shooting during Ramazan, becoming one of the numerous victims of the gangs of Mehmoodabad.

At the age of 30, Maimuna became a widow. “The men can’t come into the house,” whispered an elderly woman from the colony, as she led us through narrow, meandering streets to her niece Maimuna. “She is a bewah (widow) now. She is observing iddat.”

A little girl peeks out the door of her house in Chanesar Goth, where fights between gangsters turn as violent as Lyari’s. During one such fight, Safia (below) lost her father. The little girl makes a gun with her hands to show how her father was killed. PHOTOS: ATHAR KHAN/EXPRESS

However, Maimuna’s glassy stare and trembling lips are not the only tell-tale signs of a life cut short in this colony. Another widow lives a stone’s throw away, but this one was nine months pregnant. Zehra said criminals from a gang in the goth killed her husband because he told them not to sell drugs.

“These men are evil,” said the frail 22 year old. She feebly gestured to Safia, her firstborn who is still a toddler, to show us a photograph of her deceased husband, Ayaz Ali. “They [gangsters] come into our houses drunk and misbehave with our women… there is a special place in hell where they will rot.” She asks baby Safia to show how the gangsters killed her father. On cue, the child raises her thumb to show the hammer, and extends her index finger to illustrate a barrel. Her familiarity with such aggression is no surprise, as gunshots, rockets and grenade attacks are a routine occurrence in the neighbourhood. At sundown, men armed with automatic guns roam their demarcated areas and hide behind established ‘morchas’ to take aim against a rival. The walls are pockmarked with bullets. When the lights go out, the children playing hopscotch drop their pieces of chalk and rush inside lest one of them is caught in the crossfire.

These stories unveil the fear and anger of poor families settled for generations in Chanesar Goth — an area once notorious for drug peddlers. It is now described by locals as a ‘mini Lyari’. The narrow, unpaved streets and inundated roads are not very different from Lyari — there is even a football stadium where young men kick off after a day spent strolling through the jumble of littered streets.

But these crowded, winding streets pose big problems for the law-enforcement agencies. When they go after thugs from the two gangs operating in the settlement, the labyrinth seems to swallow them up. The gangsters scurry to their cubby holes till the coast is clear and threaten poor residents to protect them. From drug peddlers to target killers, extortionists and kidnappers, Chanesar Goth has become a safe haven for every criminal — even those fleeing the boots of the Rangers on another side of town.

Chanesar Goth’s brutal history can be traced back to fights between drug peddlers, Shaukat aka Ashok Kumar and the Aziz Lasi group. Lasi’s parents migrated to the area in the early 60s. After he grew up, Lasi started selling hashish in the area, set up gambling dens and became a prominent supplier for other parts of the city as well. Later, he joined the Pakistan Peoples Party (PPP) but left it after having a fight with another drug peddler, Ashok Kumar, who also belonged to the PPP.

Lasi and his aide, Murtaza Khaskheli, were killed in 2010 near Kala Pul by six men, who were allegedly sent by Kumar when they were on their way to the city courts in June that year. For some time, the war between the gangs died down and the area became relatively peaceful.

But now, a new rival gang to Askok has emerged and it is headed by Hackle and his wife, Fatima. “It used to be a war over the drug trade but the situation has changed,” a senior resident told The Express Tribune. “Now it is a turf war as both gangs often attempt to occupy each others’ territory.” He added that many criminals, including Lyari gangsters and some armed political workers, have also joined them.

Chanesar Goth has largely been a PPP area as the party has emerged victorious in both local and general elections from this constituency. Some dwellers still recall their meetings with Zulfikar Ali Bhutto, who provided electricity and drinking water. They said Benazir herself used to visit the area.

In the recent elections, the PPP lost, however, the PS-114 seat to Pakistan Muslim League — Nawaz’s (PML-N) Irfanullah Marwat, who allegedly had the complete backing of Ashok.

Residents accused political parties of backing these criminals to get support during elections, a charge which dominant parties of the locality vehemently deny. “Historically, the area has a history with the PPP, the Muttahida Qaumi Movement and the PML-N,” said PPP Senator Saeed Ghani, whose house is located inside the goth — right opposite an abandoned house brimming with garbage. “If you trace the political background of these gangsters in Chanesar Goth, you will know which party they are getting protection from.”

Marwat, too, denies any involvement. “Criminals always join the party in power but we do not have any links with them [gangsters or drug peddlers],” he insisted. “Some criminals took the shelter of our party in the past but we kicked them out.” Marwat added that he was elected in 2002 as well but the goth was not in his constituency at the time. As the goth increasingly becomes a hotbed for criminals on the run, the crime spills into surrounding residential areas of Azam Basti, Parsi Colony and Defence Phase I. Residents have reported an increase in burglaries as well as mobile-snatching at gunpoint, and have also been threatened. One staff member of The Express Tribune was injured by shrapnel from a stray bullet as he drove past the lawless den late at night.

Behind every successful gangster…

They may not fire bullets but the women in Chanesar Goth most likely call the shots. Fatima is the wife of a criminal on the run but insisted her husband earns a lawful income from a small business.

Police officials suspect that Fatima and her husband have ties with a political party that protects the suspects rounded up by the police. When The Express Tribune approached her residence, Fatima, along with a dozen middle-aged women, create a hullaballoo. “The police don’t help us,” she said. “The new SHO is helpful but they don’t register our FIRs in murder cases.” One by one, the women start narrating accounts of how Ashok’s men allegedly burnt down their property, causing them to seek refuge in the small houses of their relatives.

At rival Ashok’s three-storey house a few yards away, the women are equally incensed. “The Rangers are always at our house looking for him but he is not here,” one young girl beseeched. Fatima and her gang have threatened to kill more people, she said. “We are told that if we complain to the police, another body will be given as a gift.”

Recently appointed Mehmoodabad SHO Mohammad Sarwar alias Sarwar Commando said the women storm his police station if a man from the colony is arrested. He has worked hard to penetrate what were previously no-go areas of the goth but his patience is wearing thin.

“I did what I could but I want a transfer from here,” he admitted. “This is a mini Lyari. I am proud that I have almost controlled the illegal activities in Chanasar Goth but I need more police strength and equipment to completely restore peace and eliminate the drug mafia.”

Commando felt that more police vans and armoured personnel carriers can improve patrolling and snap-checking in the area. Raids and operations can take place more effectively, he said, adding that establishing eight police posts can also deter criminals from slipping into residential areas. But without bullet-proof jackets, helmets, sophisticated weapons and walkie-talkies, his efforts to curb crime in the settlement are in vain, he said.

For now, the residents of Mehmoodabad and adjacent residential areas live in fear. In the goth itself, wedding celebrations are muted and children are afraid to venture out alone. Just last week, the groups opened fire at each other, but luckily no one was harmed. An unsuspecting goat, however, was caught in the crossfire and had to be slaughtered to end its misery. Despite the death of 15 people, with 200 injured in 2013 alone, this gang war in the centre of the city seems to be largely ignored.