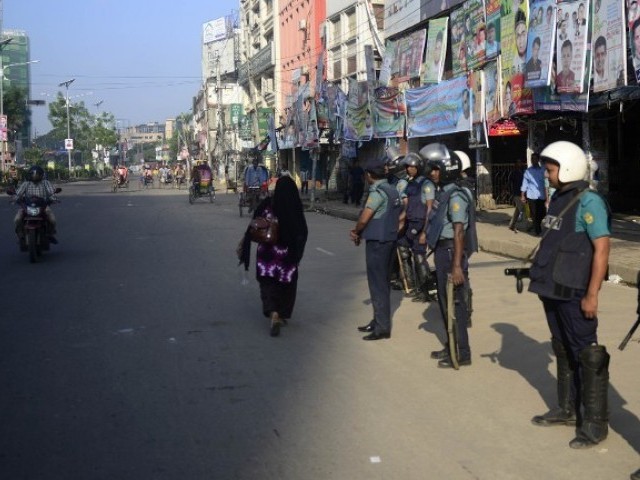 Bangladeshi police personnel stand guard during the second day of a nationwide strike called by the opposition BNP in Dhaka. PHOTO: AFP

DHAKA: Bangladesh opposition supporters went on the rampage Tuesday, blocking roads and ripping up railway tracks after rejecting plans for a January 5 election, plunging the nation into fresh political turmoil.

The Bangladesh Nationalist Party (BNP) and its allies called a 48-hour nationwide blockade to press their demand for a suspension of the poll date announced on national television on Monday evening.

The BNP has been calling for Prime Minister Sheikh Hasina to resign to make way for a neutral caretaker government to oversee the elections – demands rejected by Hasina and her party.

Police fired rubber bullets and tear gas at hundreds of protesters who took to the streets in the cities of Rajshahi and Khulna, leaving at least 30 people injured, television station Channel 24 said.

Police said one protester drowned in the northern town of Sirajganj after he jumped into a pond to escape the gas, although ATN News TV station said he died after being hit by a tear gas shell.

“He died on the way to hospital,” district police official Moktar Hossain said, adding that an opposition official was arrested as he led some 150 protesters in a blockade of a key highway.

A train was derailed at Gouripur, some 100 kilometre north of the capital Dhaka, after police said they suspected opposition supporters removed sleepers from the tracks.

“No one is injured. But it disrupted train communication between Dhaka and Mymensingh. We suspect the sleepers were removed by the opposition supporters,” Mymensingh police chief Moinul Haq told AFP.

Police also said the railway line between Dhaka and the port city of Chittagong has been cut since late Monday after opposition activists removed parts of rail tracks and sleepers, and tried to torch a railway bridge near the eastern town of Imambari.

Protests erupted across the country on Monday night immediately after Chief Elections Commissioner Kazi Rakibuddin Ahmad announced the vote plans and urged parties to take part in the contest for the 300-seat parliament.

One protester was killed in a small blast and scores were injured as opposition supporters hurled dozens of crude bombs, clashed with police and blocked roads and railways in major cities and towns.

On Tuesday, security was tight in Dhaka with police and paramilitary border guards out in force, police spokesman Masudur Rahman told AFP. Inter-regional bus services were suspended in case of violence, stranding thousands of passengers.

The announcement of an election date came after weeks of deadly protests by the BNP and its allies left at least 30 people dead and hundreds injured over the election process.

Hasina has rejected calls for a caretaker government and instead formed a multi-party interim cabinet last week which is composed of her allies.

She asked the BNP to join the cabinet but her invitation was bluntly refused by the opposition.

While previous elections have been organised by non-partisan caretaker governments, Hasina scrapped the arrangement in 2011.

She argued that the system had paved the way for the army to seize power in a country which has witnessed at least 19 coups since 1975.

Bangladesh has been plagued by political violence ever since it won independence from Pakistan in 1971 after a bloody war of secession.

Deadly clashes and a boycott threat by Hasina’s Awami League led to the cancellation of elections in January 2007 and a subsequent coup.

An army-backed civilian government remained in power for two years until it called elections in December 2008 which were overwhelmingly won by the Awami League.