Source­s say both the men were workin­g for PAC chief Uzair Baloch.
By Our Correspondent
Published: November 26, 2013
Tweet Email 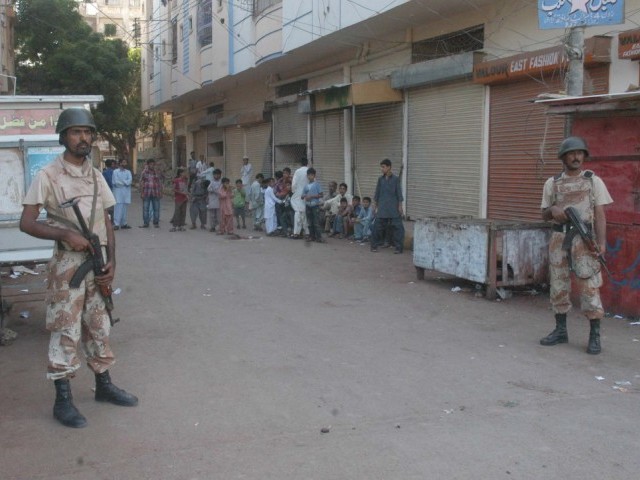 "One of the suspects was wanted in 92 cases of murder, but these were only reported cases," Police official. PHOTO: RASHID AJMERI/EXPRESS

KARACHI: Two most-wanted men of the Lyari gang war were killed in separate encounters by law enforcers in the limits of Chakiwara police station on Sunday night.

Ejaz Punjabi was affiliated with the Chotu group — one of the most dangerous groups of Lyari gangsters – and Dilshad Memon was affiliated with the Wasiullah Lakho group. They were shot dead when the police and Rangers conducted targeted operations after a tip-off in Rangiwara and Singo Lane, respectively. Sources said that both the men were working for the chief of defunct Peoples Amn Committee, Uzair Baloch.

According to police officials, Punjabi was involved in 92 cases of murder but sources informed The Express Tribune that the number could be over 100. “These are only the registered cases and the unregistered ones could be more,” the sources claimed.

Memon, whose criminal record started after he killed his father in public, has targeted over 20 persons.

“Both criminals have been killed in two separate encounters,” confirmed Chakiwara SHO Sajjad Mangi. He added that there was tough resistance during the encounters conducted by the police and Rangers together.

Some of the gangsters were also held during the two raids but the law-enforcement agencies had not disclosed their number. Rangers took away all the arrested persons to an undisclosed location for further probe. It was also learnt that some of the accomplices of Punjabi and Memon fled away during the raids.

The exchange of fire between the two Lyari groups – Uzair Baloch and Noor Muhammad aka Baba Ladla – stopped on Sunday and the situation seemed normal after that. However, fear prevails in most parts of Lyari, including Niazi Chowk, Gul Mohammad Lane, Ali Mohammad Mohalla, Shah Baig Lane, Singo Lane, Phool Patti Lane, Dubai Chowk, Gulistan Colony and the surrounding areas.

These areas have become no-go-areas for outsiders as the law and order situation is still tense in the limits of Chakiwara, Kalakot and Kalri police stations. The police and Rangers personnel were also seen on patrol in Lyari throughout the day.