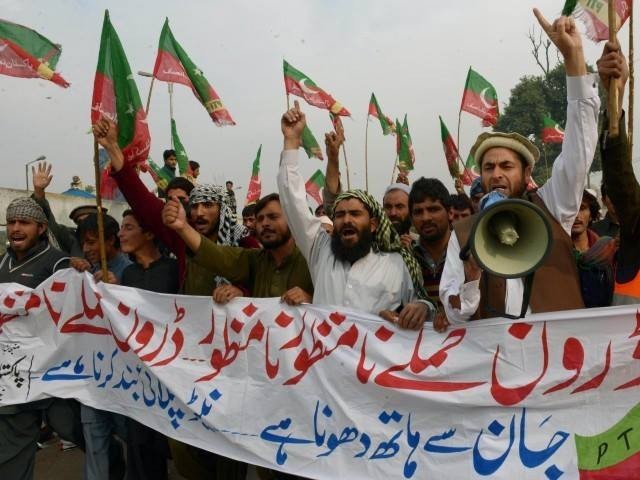 Activists of Pakistan Tehreek-e-Insaaf (PTI) shout slogans as they arrive to attend a protest rally in Peshawar on November 23, 2013. PHOTO: AFP

PESHAWAR: A group of lawmakers from the Khyber-Pakhtunkhwa (K-P) assembly marched towards the US consulate in Peshawar to submit a memorandum against drone strikes, Express News reported on Monday.

K-P Minister for Finance Sirajul Haq led the group of parliamentarians, while Chief Minister Pervaiz Khattak could not accompany the protesters.

The parliamentarians walked all the way to the consulate to submit the four-page memorandum.

The K-P coalition partners plan to do the same in Islamabad. Advisor to CM Shiraz Paracha had said that the provincial government will go all out to lodge a peaceful protest on international and national levels.

PTI supporters have also been holding sit-ins in parts of K-P in their attempt to block Nato supply routes.