Business ownership: Entrepreneurship to ‘get boost’ as New-G launched

Business ownership: Entrepreneurship to ‘get boost’ as New-G launched 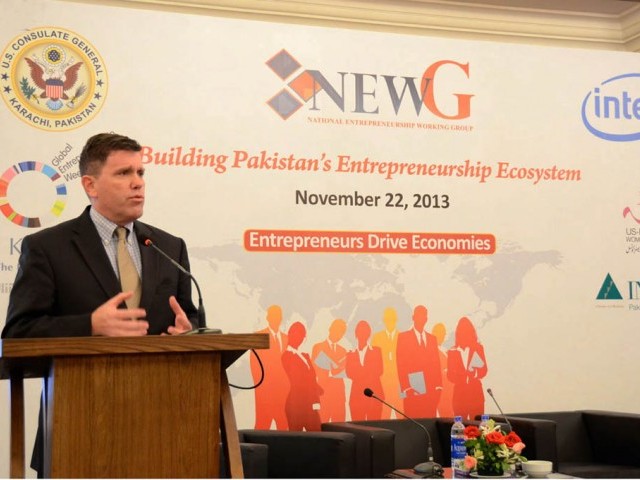 KARACHI: As the world celebrates the Global Entrepreneurship week, it was an apt time for the launch of the National Entrepreneurship Working Group (NEW-G) in Pakistan. Armed by the support of the United States consulate in Karachi, New-G is a non-profit entity that will work on entrepreneurship and innovation in the country.

The United Nations Conference on Trade and Development identifies entrepreneurship as a leading indicator of economic growth. However Pakistan has been one of those developing countries that lacks a national strategy or policy framework to promote entrepreneurship.

During an afternoon conference in Karachi, business leaders, academics and government officials gathered to discuss how to build Pakistan’s entrepreneurship ecosystem.

Dodman said the US government will provide professional and technical expertise to NEW-G as he looked forward to working alongside the organsation.

Meanwhile, S Rizwan Razvi, NEW-G president, said the group’s plan was to work with the country’s educational, business, regulatory and social sectors to assist Pakistan towards future prosperity. “One of the goals of today’s seminar is to engage all stakeholders in designing strategies for the promotion of entrepreneurship in Pakistan,” said Razvi. “Pakistan’s biggest challenge in the upcoming years is to create 36,000 jobs and this can only be done if new businesses are developed.”

Comparing the statistic to the US, Dodman said there were more than 10 million women running their own businesses in the country, contributing $3 trillion to the economy.

Dodman further pointed out that the US consulate supports NEW-G’s vision of promoting female enterprises and have contributed through various programmes. One such programme is the mentorship scheme through which the US consulate has provided mentorship to 5000 individuals, that includes several women.