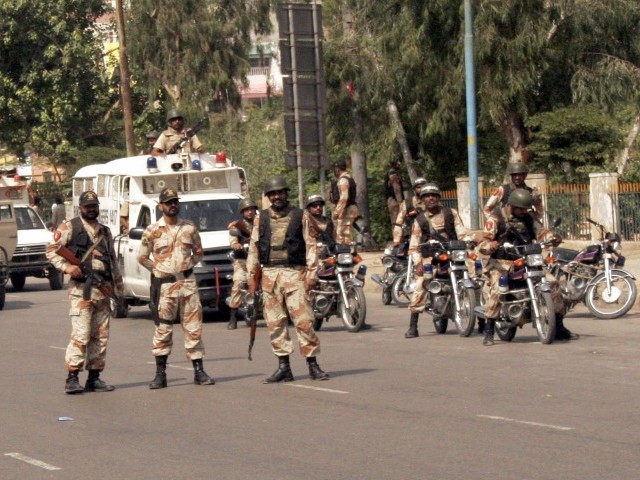 Rangers and police officers are patrolling the streets of Karachi. PHOTO:ATHAR KHAN

Tension prevails in Karachi, as at least 28 people have been killed in latest incidents of violence as of today (Sunday). This comes as ANP has officially announced to boycott the by-polls for the PS-94 Karachi seat. Dozens of others have been injured in the recent spate of shooting.

Two bodies were found from Lee Market and one from Kalry area of Lyari this morning. In Baldia town, five people in a hotel were gunned down when unidentified men opened fire on them. Another young man was also killed in the same locality. Another three people were shot dead in Garden area. A man was killed by firing in Banaras, while six people were killed in different areas of Orangi town and more than 20 were injured.

CCPO Karachi Fayaz Leghari has said three people have been arrested with regard to the violence. Taking note of the recent target killings, Interior Minister Rehman Malik has directed DG Rangers to improve security. He has ordered the rangers to patrol sensitive areas and take action without any discrimination. He has also appealed to political leaders to be patient and cooperate with law enforcement agencies.

Polling comes to an end

Polling has ended for by-elections in PS-94 Karachi, amid tight security arrangements. There was a high turnout for the by-polls despite the prevailing security situation. The seat was left vacant after the murder of MQM MPA Raza Haider.

MQM candidate for PS-94 is Saifuddin Khalid has expressed confidence that he will win the seat. His main opponent ANP’s candidate Pir Riaz Gull has boycotted the polls. Eighty six polling stations have been set up for the by-elections and 22 have been declared sensitive.

Updated from print edition below.

On the eve of one of the most tension-filled by-polls in the city’s history, the city was once again in the grip of violence.

At least nine people were shot dead in incidents of targeted killings on Saturday night in different localities of the city.

Motorcycle riders were involved in all of the firing incidents.

Five people, who were sitting outside their homes following a power cut, were shot dead in Rasheedabad in Baldia Town.

SHO Rao Khalid said the victims belonged to the Pakhtun and Hazara communities. He said that policemen were also targeted when they tried to take the corpses to hospital. The deceased were identified as Mohammad Bashir, 40, son of Qasim, Kashif, 17, son of Safdar, Saif, 20, son of Khalil, Akbar, 70, son of Maqmal Khan and Fayyaz, 30, son of Misal Khan.

Separately, two corpses were found in the Ramswami area of Garden East. Officials said four people had been injured in the firing here.

Two more corpses were found from Pak Colony and another man was injured near Dhobi Ghat. The victims were later identified as Rashid and Atif.

Just a day before an election face-off between the city’s two main political parties, five more people were found shot dead on Saturday.

Two bodies were found within the limits of the Nazimabad police station early Saturday morning. According to the police, the bodies of 28-year-old Shaukat Baloch and 25-year-old Salman Baloch were found at a garbage-dumping site near the inquiry office in Nazimabad No. 2. The police said that the men had been shot dead and their arms and legs had been tied up. The bodies were taken to the Abbasi Shaheed Hospital for medico-legal formalities, while a case has yet to be registered against the suspects.

Peoples Peace Committee spokesperson Zafar Baloch said that the victims were supporters of the Pakistan Peoples Party and had been abducted from work in Garden. Both men were residents of Lyari.

A 30-year-old man, identified as Irfan Shaikh, was found dead in Korangi Town within the limits of the Zaman Town police station. The body was taken to the Jinnah Postgraduate Medical Centre for a post-mortem, and a case has yet to be registered.

SHO Asif Shah said that Shaikh’s bullet-riddled body was found in the bushes near a graveyard in Korangi Town. The victim was a resident of Chanesar Goth near Mahmoodabad and initial investigations suggest that he belonged to a criminal gang, said Shah.

In another incident, a 34-year-old man, identified as Muhammad Saleem, was shot dead by unidentified motorcyclists in Khamosh Colony, Nazimabad. Two men, identified as Anar Khan and Kabir, were also injured in the incident.

Meanwhile, a 30-year-old man, identified as Bukht Ali, was killed while 40-year-old truck driver Hazoor Bux was injured when three unidentified men opened fire at a truck on the Northern Bypass near the Afghan Morr, Gadap Town within the limits of the Gulshan-e-Maymar police station. The body and the injured man were taken to the Abbasi Shaheed Hospital, while the police have registered an FIR against the suspects.

SHO Amanullah Marwat said that the men were on their way back to the city after unloading goats near the Afghan refugee camp when they were attacked. The motive behind the incident is believed to be a personal enmity. The men hailed from Sadiqabad, Punjab.

‘Not even America can control target killings’