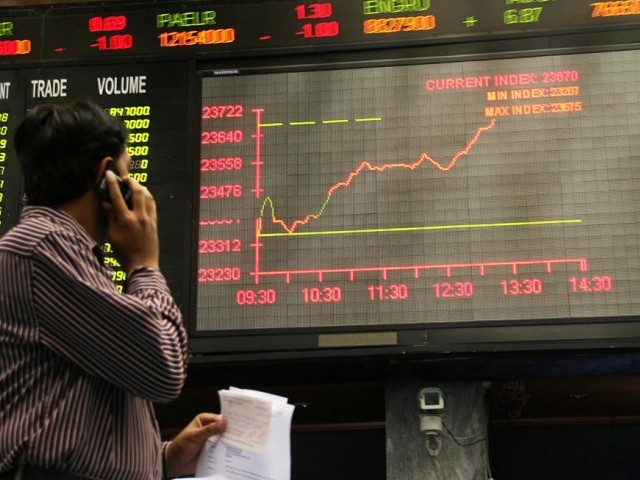 A stock broker during the trading session on Monday. The exchange carried the upward trend on Tuesday. PHOTO: ONLINE

There was also optimism, according to an analyst, that the rise would continue.

“The Karachi Stock Exchanged experienced a record-breaking closing rate,” said Fahad Ali of JS Global Securities. “The upward movement continued and break outs were seen in quite a few stocks like Nishat Mills and Pakistan Telecommunications Company Limited (PTCL), indicating that the rise would continue.

“Rumours of foreign interest continued in the market. Today was the first day of book-building for Engro Fertilizer which also developed a positive interest in Engro Corporation.”

Engro Corporation’s stock price has been rising recently on excitement over the IPO, repeatedly hitting its upper lock.

Another analyst credited foreigners’ interest in the market.

“Stocks have been surging of late as foreigners continue to hunt value opportunities and take advantage of locals’ skepticism,” said Faisal Bilwani of Elixir Securities.

Shares of 343 companies were traded on Tuesday. At the end of the day, 191 stocks closed higher, 125 declined while 27 remained unchanged. The value of shares traded during the day was Rs9.56 billion.

Foreign institutional investors were net buyers of Rs206 million during the trade session, according to data maintained by the National Clearing Company of Pakistan Limited.