Migrating out: Lyari forces its Christians residents to move out

Migrating out: Lyari forces its Christians residents to move out 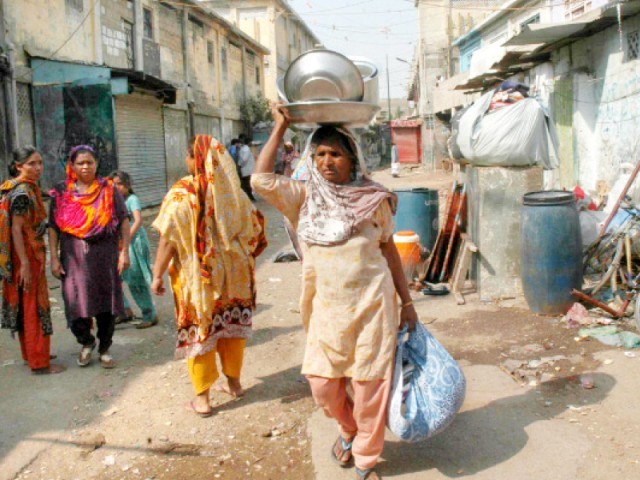 Members of other minority communities, apart from Christians, have also moved out of Lyari. PHOTO: FILE

The unabated violence in the city’s volatile Lyari neighbourhood has forced its entire Christian community to move to safer areas The Express Tribune has learnt.

Threats, killings, interferences in personal matters, drugs, extortion and rape of young girls were some of the reasons that compelled the out-migration from one of the oldest parts of Lyari, called Slaughter House.

Around 600 houses in Slaughter House, which comprises 22 buildings, was established in 1916 for the sanitary workers of the Karachi Metropolitan Corporation (KMC). It now stands deserted as its occupants were forced out by a group of gangsters, who were forcing them to join their ranks against its rival group or leave the compound forever. The residents, who were mostly employees of the KMC, were paying a monthly rent of Rs450 to the department.

The Slaughter House was primarily a residential area for minorities, which included 90 per cent Christians and 10 per cent Hindus. There are seven sacred worship places – four churches and three temples. “It is almost empty now,” disclosed an affected elder of the Christian family. “We all are separated now. We won’t be reunited again,” he feared.

What led to such a massive migration out of Slaughter House? The old man said the condition in the area was not suitable for a family to resident. “Our daughters were not safe. Our life and property was at stake,” he explained. “Scores of families left homes without even taking their valuables.”

Though the entire population was being threatened since 2008, the recent clashes between the Lyari gangsters made the older residents leave Lyari forever. The killing of Victor William Bhutta on August 13 near Spencer Eye Hospital and the killings of Yousuf Iqbal alias Joja and Younis Inayat on October 26 led the community to seek shelter elsewhere.

“A lot of the families have left the compound since 2008, after their daughters were kidnapped and raped,” claimed another elder of the community. “No one knows where they have gone. I think some of them migrated to the Punjab.” He recalled an incident when a teenage girl, who was dancing at her brother’s wedding in the compound, was kidnapped in the wedding rush by some gangsters. “Her parents, brother and relatives cried and appealed to the kidnappers but they didn’t listen,” he narrated. “She was dishonoured and was left outside the compound the next morning. That family was never seen in the city again.”

The displaced persons informed The Express Tribune that the gangsters made their lives miserable. They would demand extortion every month in the name of utility bills – Rs300 for a gas connection, Rs400 to Rs500 for electricity. The residents said that the gangsters also occupied the houses of some displaced families.

“The tale doesn’t end here,” the elder was in tears now. “Drugs were being sold freely, including crystal, hashish, heroin and opium,” he counted. “All illegal activities were forced down on us.”

Why didn’t they complain to the police? One of the men who has left Lyari for good smiled at the question. “Where is the law? The police, Rangers and the government know exactly what is going on in Lyari. The criminals rule Lyari, beta [son].” The elders are not very fond of the government either, blaming it for going soft on criminals. “The law enforcers advised us we should leave the compound,” said one man. Meanwhile, Baghdadi SHO Alam Dahiri denied that any migration took place.

These displaced families have yet to be contacted by the government. They are in desperate need of places to stay and a source of livelihood to feed their families.