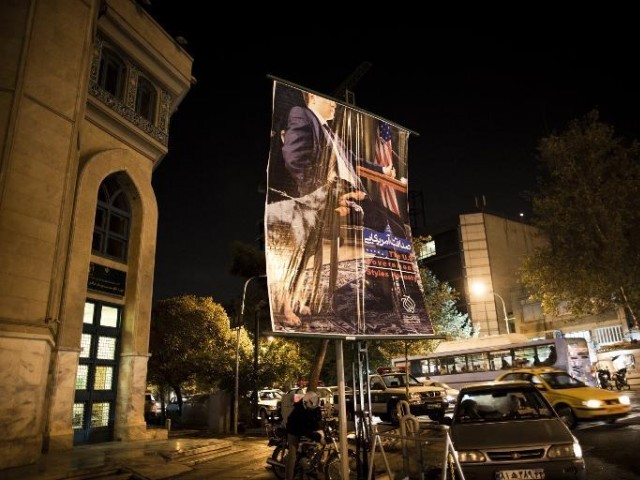 An anti-American poster depicting an American negotiator sitting at a negotiating table with a dog on his side is displayed next to a mosque in downtown Tehran on October 27, 2013. PHOTO: AFP

GENEVA: Washington is willing to offer Iran limited sanctions relief if it agrees this week to take a “first step” to stop advancing its nuclear programme, a senior administration official said Wednesday.

Speaking on the eve of a fresh round of talks between Iran and world powers in Geneva, the US official told journalists there had been a “key shift” and that Tehran seemed serious about negotiations.

“What we’re looking for now is a first phase, a first step, an initial understanding that stops Iran’s nuclear programme from moving forward for the first time in decades and that potentially rolls some of it back,” said the official, speaking on condition of anonymity.

In exchange, the official said, Washington was willing to make a move on reducing the crippling economic sanctions that have been imposed on Iran over its nuclear ambitions.

“We are prepared to offer limited, targeted and reversible sanctions relief. We are not talking about touching the core architecture of the Iranian sanctions regime in this first step,” the official said.

These first steps, the official said, would “put time on the clock” to negotiate a final agreement on Iran’s long-disputed nuclear programme.

The official would not provide specific details of the offers on the table, which will be discussed on Thursday and Friday as Iranian officials meet members of the so-called P5+1 group.

The P5+1 includes the five permanent members of the UN Security Council — Britain, China, France, Russia and the United States — plus Germany.

The sides are holding another round of negotiations after talks last month that officials said were the most substantive and positive in years.

The group has held years of talks with Tehran on its uranium enrichment, which Western powers suspect may be aimed at developing nuclear weapons.

Iran has repeatedly denied this, insisting its nuclear programme is only for generating electricity and for medical purposes.

This week’s meeting is the second since President Hassan Rouhani took office in August pledging to resolve the nuclear dispute and lift sanctions by engaging with world powers.

The US official said a clear change could be seen in the tone of the talks.

“For the first time, Iran appears to be committed to moving this negotiation process forward quickly,” the official said. “We are having very detailed discussions in a way we have not before.”

Terms of engagement: India says talks depend on peace on LoC