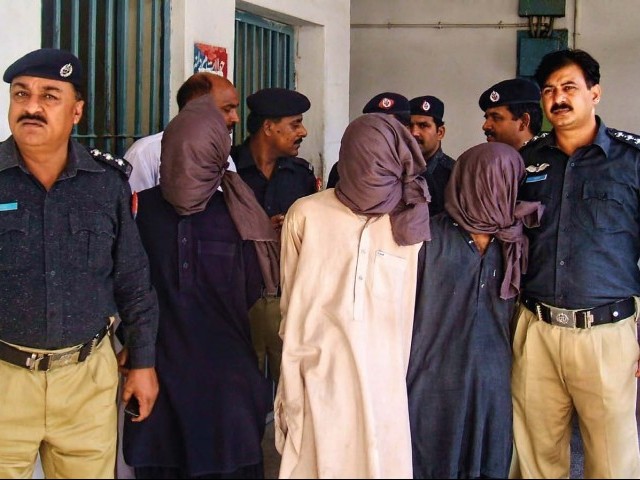 Police claim militants have confessed to past attacks

BAHAWALPUR: The Bahawalpur police on Thursday arrested seven militants including Abdul Rahim alias Talha, head of the Tehreek-i-Taliban Punjab (TTP) (Lashkar-i- Jhangvi Imran Group), in Ahmedpur East. The militants were sent on judicial remand by an anti-terrorism court. They were produced in the ATC amid high security as there were intelligence reports of a possible attempt by the TTP’s Qari Abdullah group to execute them.

The militants confessed to plotting assassination attempts on the prime minister, the foreign minister, the federal minister for religious affairs and senior police and army officials. The militants revealed that they were planning attacks at Ghazi Ghot Bridge, Taunsa Barrage, Dera Nawab Cantt area and Vehari grid station.

They admitted involvement in an attack on an Inter Services Intelligence (ISI) office in Multan in which 12 people were killed, and the murder of a local journalist, Ameera Dhoal.

Captain (r) Abid Qadri, the Regional Police Officer and Baber Bakht, the District Police Officer, disclosed the details during a press conference at their office on Thursday morning.

They said that the militants attacked a patrolling police team in Ahmedpur East with grenades when they were asked to stop for a security check. The police team, they said, responded in a timely manner and managed to arrest the militants.

Qadri said the militants also confessed to killing five Shias in Khanewal; Meer Buksh Dhool, a banned organisation’s leader, in Hitchi; and a civilian during a bank robbery in Jalalpur Peerwala. The militants, Qadri said, were also involved in a number of bank robberies.

The police recovered grenades, kalashnikovs, pistols and other weapons from the militants, the RPO said.