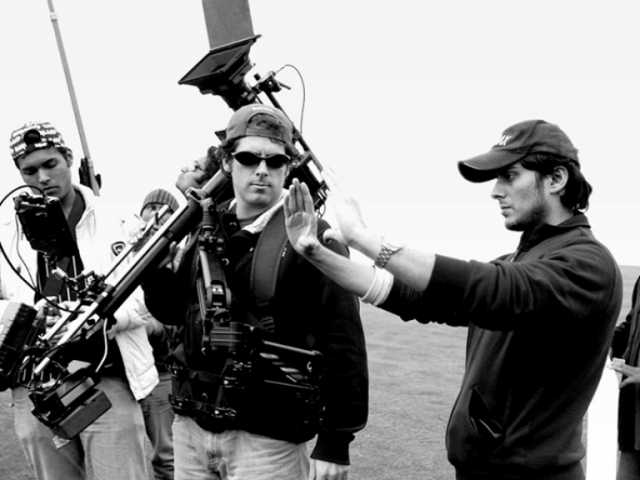 Bilal Lashari says there is nothing wrong with people enjoying Waar as a rebuttal to Bollywood films about Pakistan. PHOTO: PUBLICITY

KARACHI: In India, curiosity about Waar has doubled since Ram Gopal Varma’s adulatory tweets. If it wasn’t enough that the film’s bad guys are RAW agents unleashing terror attacks on Pakistan, RGV’s public admiration – “Indian film-makers should get off our assumed high horses and look at Pakistani films seriously” – definitely got our friends across the border intrigued.

@Qwintessentwit I wanna see Waar – @jehan_ara get me a DVD when you come in Feb – I am chairing the NASSCOM ILF event this year by the way !

“I have not approached anyone specifically for distribution in India, but I cannot give any more details on that for now,” Lashari tells The Express Tribune. Given the theme of the film and the perception that ‘Waar shows India as cause of nation’s problems’, the director says, “I have no idea how people will react, but it would be great if it ends up being screened. A lot of people are saying it’s never going to happen.”

Bollywood films depicting military or intelligence agents from Pakistan – such as Ek Tha Tiger and Agent Vinod – have traditionally not passed the local censor board filters. Lashari feels Waar could meet a similar fate. “I would love to show the film as it is,” he says. “I think it would get a very interesting reaction. I am curious to know how people will react to it – I don’t think they should react badly.”

The director remains adamant in his refusal to remove scenes. “I won’t be cutting out any scenes because I can’t think of a way around it,” he says. “I think we have been very subtle,” he says, referring to the portrayal of RAW agents Ramal and Laxmi, who mastermind major terror plots in Waar. “We will probably take out some words. The censor board is yet to see the film. They will watch the unedited version and propose edits. We will amend it accordingly as there is no harm in toning it down for that one market.”

Seriously, though – why Indian agents?

Lashari hints that the inclusion of Indian agents in the storyline made the story more “interesting”. “It could have been any other [villain]. But the specific Indian element made it more interesting,” he admits. “I knew people would be intrigued but never thought it would be taken as seriously as it has.”

While he is aware that it has irked those across the border, he relates an incident at a bookstore, where a group of people approached him with compliments. “They were really happy. One of them said ‘Finally humari taraf se bhi jawab gaya’,” he said, referring to Bollywood’s negative portrayal of Pakistan’s institutions.

“It’s not the reaction I was expecting, but at the same time a part of me thinks there is no harm. They make films like these too, so here is the first from our end. If people are enjoying Waar as a rebuttal, then that’s okay too.

Given the tense relations between India and Pakistan and recent skirmishes on the LoC, the director is aware that the message of Waar may not be warmly welcomed by Indian audiences. “The question is whether they will take it as being just a film. People need to realise this is entertainment – not a documentary. The film is not against the people of India,” he says.

“The tricky part is the notion of so-called ISPR involvement in the film. If that’s the perception India wants to maintain, then it can be taken as more than just a film,” he continues, adding, “I’ve given up trying to convince people that there is no ISPR involvement in the script or characters. But that would make things boring wouldn’t it?”

When asked how he feels about Varma watching a pirated DVD of Waar, Lashari laughs. “I don’t feel so great about it. We are working on an international release so pirated DVDs obviously don’t help. But I did ask him if it was a good pirated version,” he laughs. “I don’t want people watching a sh***y version.”

He adds that he called RGV himself. “I was sick of people telling me about the tweets so I thought I would get in touch and make sure it is him,” he shares. “Turns out it was. We had a really good conversation for 15 to 20 minutes. I wanted to accuse him of hijacking my life!”

As unlikely as it may seem, Lashari hopes to see his film release in India. “If it does get screened, the release in India will be limited. It will not be a mainstream release.”