‘What did my grandmother do wrong?’

‘What did my grandmother do wrong?’ 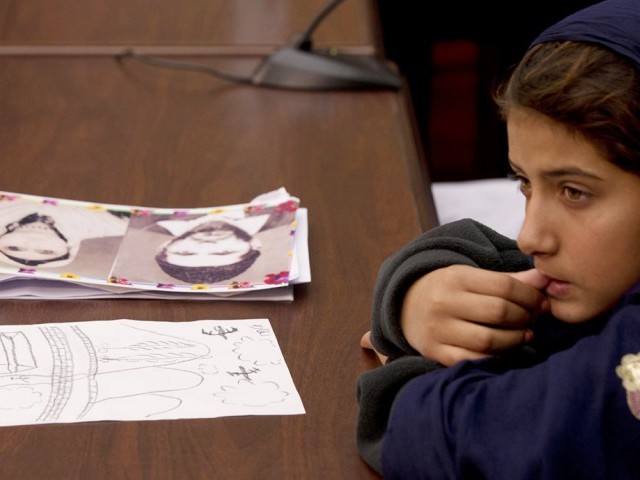 Nine-year-old Nabila Rehman sits in front of pictures of her relatives killed in drone strikes, at the start of a news conference on Capitol Hill in Washington on Tuesday. PHOTO: REUTERS

Nabila Rehman was picking vegetables from her family garden last year when missiles from a US drone rained down from the sky, killing her grandmother and injuring her and seven other children. The nine-year-old Pakistani girl now has a question for the US government: “What did my grandmother do wrong?”

The family, who survived the drone strike, appeared before US Congress members on Tuesday to record what happened on the life-altering day.

Nabila’s father, Rafiq, has travelled with her from North Waziristan to Washington, along with his 13-year-old son Zubair – also wounded by shrapnel – to put a human face on America’s drone campaign.

He told the briefing through a Pushto translator that he did not have any bad feelings towards the US before his mother was killed in the drone strike. Replying to a question, he said that when his mother died in the drone strike, the neighbours told him, “See what the United States has done to your mother. You should hate them.”

“Our children now do not want to go to school, they even fear to play outside. We live in constant fear. Before the drone campaign started, we were busy in our own lives,” Nabila told the Congressmen. Their account was cited last week in an Amnesty International report that demanded an end to secrecy around the drone attacks.

Rehman said he accepted an invitation from a documentary production company to come to the United States because “as a teacher, I wanted to educate Americans and let them know my children have been injured.”

To a question on what Rehman would say if he got the chance to meet President Obama, who approves the strikes, he said, “I would like to tell President Obama that what happened to my family is wrong. I would urge him to find a peaceful answer to end this war.”

He pointed out, “I have noticed that everyone in the US lives in peace and I dream that my children will also be able to live in peace.”

Rehman’s lawyer, Shahzad Akbar, who represents others who say they are victims of drone strikes, had planned to accompany them but the State Department denied him a travel visa, according to Jennifer Gibson, a lawyer with Reprieve, which works with Akbar. “[The family] are not asking for money. They want answers,” she said. “They hope that by coming here and saying we’re the faceless people who you keep counting as numbers, somebody is going to start listening and questioning if this is really a smart policy.”

Congressman Alan Grayson, who hosted the briefing, said the presence of five members of Congress at the briefing indicated that there was a fair amount of interest from representatives.

He, however, conceded that he does not see any formal briefing on drones soon as most of the house committees are chaired by the people who are friends of those who make up the military industrial complex. “I believe that over time, people will realise the gravity of this issue.”

How their lives changed

After the drone strike in October last year that killed Rehman’s mother, Momina Bibi, media reports confirmed a drone strike did take place, but said missiles hit a house, with one version alleging a car was struck and several militants killed.

But the aggrieved family said no building or car was directly hit in the attack. Missiles landed in the field where their grandmother was teaching Nabila how to recognise when ladyfingers are ripe enough to pick.

After a loud boom, “where my grandmother was standing, I saw these two bright lights come down and hit her,” described Nabila. “And everything became dark at that point.”

Shrapnel lodged in her right hand and she was treated at a local hospital. Her brother, Zubair, suffered shrapnel wounds to his left leg, which required two operations. His family had to take out a loan to pay for the surgery.

The family’s experience are featured in a new documentary, “Unmanned: America’s Drone Wars,” set to be released by Jemima Khan and Brave New Foundation, which takes a critical view of the strikes.

Sethi back in the saddle after 2 hours