Must not negotiate with Taliban, says head of Shia political party

Must not negotiate with Taliban, says head of Shia political party 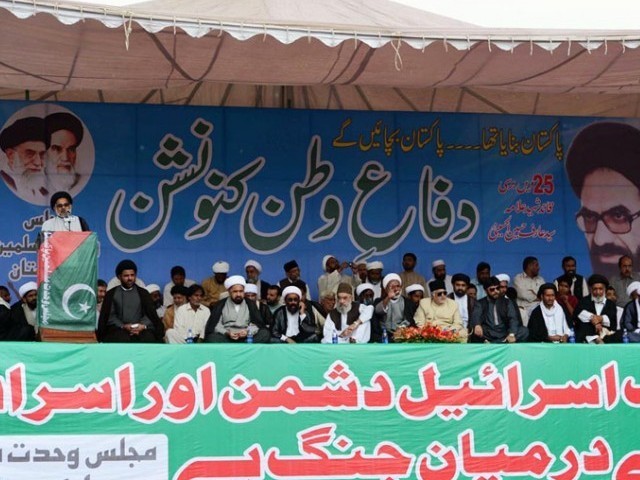 An MWM convention held in Islamabad on September 9. PHOTO: ONLINE/FILE

KARACHI: Majlis-e-Wahdat-ul-Muslimeen (MWM), the leading political group for the Shia community in Pakistan, said Sunday that there should not be any negotiations with the Taliban, Express News reported.

Allama Ameen Shaheedi said on the occasion that negotiations with militants will only result in more terrorist attacks and more corpses to bury.

The MWM leadership went on to denounce the ongoing operation against criminals in Karachi as a “mere show”. They said the Kashmir issue will remain unresolved unless a government truly representative of the citizens takes over.

Jafari also criticised the judiciary for focusing on high-profile cases and ignoring those of the poor and helpless.

Last month, Allama Jafari had said that Pakistani Shia Muslims were on the frontline in the nation’s war against terrorists and thousands have sacrificed their lives for the cause.

He had claimed citing financial, logistic and military aid to the terrorists, that the US in connivance with the Saudi monarchy was using them as proxies to spread terror in Pakistan and across the world.

On the other hand, the Chairman of Ulema Council Pakistan Allama Tahir Ashrafi emphasised on Sunday that the Taliban should be negotiated with, and the talks supervised by the Prime Minister.

Ashrafi, who hails from the Deobandi group of the larger Sunni community, was addressing the Istehkam-e-Pakistan Conference in Multan when he said talks should happen withing the parameters of the constitution.

He demanded an immediate end to US drone attacks on Pakistan’s territory.