Nawaz heads to US to meet Obama, Kerry

Nawaz heads to US to meet Obama, Kerry 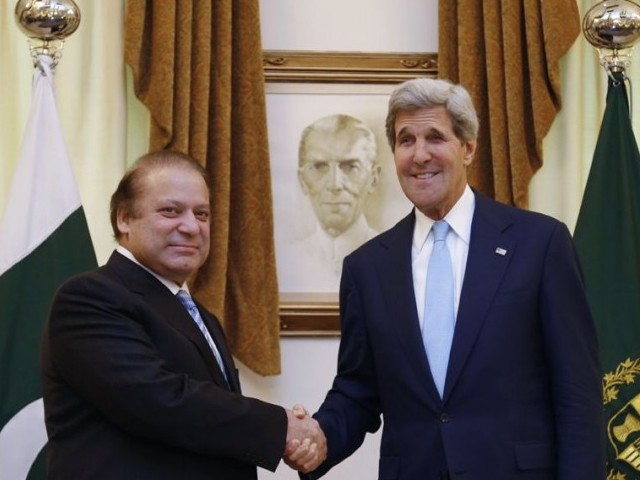 ISLAMABAD / WASHINGTON: Prime Minister Nawaz Sharif left for his visit to the United States on Saturday and is due to stay there until October 23, Express News reported.

US Secretary of State John Kerry will hold talks with Nawaz on Sunday at the start of the highest level official Pakistani visit to the United States in several years.

The two men would meet before Kerry heads on a visit to Europe, State Department spokeswoman Jen Psaki had told reporters on Friday.

Nawaz is also due to meet US President Barack Obama on Wednesday, October 23, for the highest level White House talks between the two countries since the start of the US administration in 2009, another US official said.

“It’s an opportunity to broaden and deepen the relationship that we’ve both been working very hard towards in the last few years,” the senior State Department official said.

Topping the agenda are likely to be counter-terrorism efforts and drone attacks, as well as concerns over the economy and energy supply.

Nawaz was elected in May, and Washington has praised his efforts to reduce tensions in South Asia.

Relations with the United States have also improved since they plunged to one of their lowest points in 2011 amid the killing of al Qaeda leader Osama bin Laden in a US commando raid in Pakistan, as well as the killing of 24 Pakistani soldiers in a US airstrike.

“There have been significant irritants which I think have reduced quite a bit over the course of the last year,” the US official said.

Washington needs Pakistan’s cooperation as it prepares to withdraw thousands of pieces of heavy equipment from Afghanistan ahead of the end of NATO combat operations at the end of 2014.

It is also looking to the government to try to help with reconciliation efforts between the Taliban and Afghan leaders.

The United States also wants the government to do more to crack down on militant havens. Pakistan, meanwhile, is chafing at continued US drone strikes against militants on its territory.

Drones are “part of a very comprehensive conversation we have on security across the board,” the US official said.

“As we talk about all these security issues that will be a key theme, not drones necessarily, but the security situation writ large.”