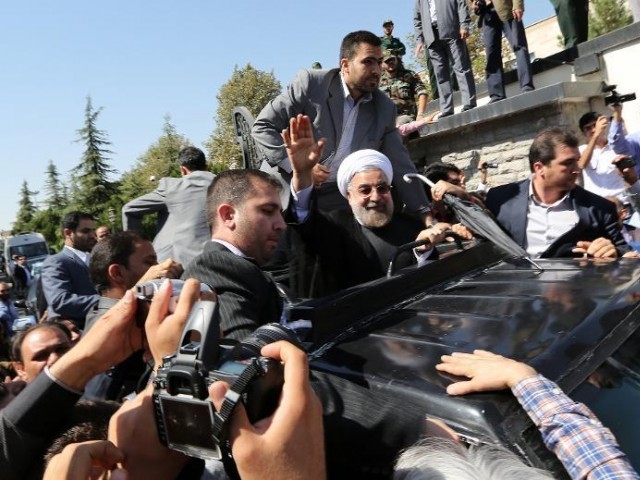 TEHRAN: World powers will meet for fresh talks with Iran on its controversial nuclear programme on Tuesday, as hopes rise for a more conciliatory approach from the new Tehran government.

The two-day meeting in Geneva will be the first such negotiations since President Hassan Rouhani, a reputed moderate, took office in August.

Rouhani has pledged to engage constructively to resolve the decade-long dispute over Iran’s nuclear drive and ultimately secure the lifting of crippling Western sanctions.

The West and Israel suspect Iran is seeking a nuclear weapons capability, which it has repeatedly denied.

Foreign Minister Mohammad Javad Zarif has taken over as Iran’s lead negotiator with the so-called P5+1 group of Britain, China, France, Russia and the United States plus Germany.

But so far he has been tight-lipped about what Iran is prepared to offer in exchange for relief from EU and US sanctions which have badly hit Iran’s oil exports and its access to global banking.

“We will present our views, as agreed, in Geneva, not before,” Zarif tweeted.

But his deputy in the talks, Abbas Araqchi, has insisted there can be no question of Iran relinquishing its stockpile of enriched uranium, which could potentially be used for civilian or military purposes.

“We will negotiate about the volume, levels and the methods of enrichment but shipping out the (enriched) material is a red line for Iran,” said Araqchi.

Uranium needs to be enriched to levels of above 90 percent for use in a nuclear warhead.

Only low levels are required to fuel power plants, while Iran says it also needs uranium enriched to 20 percent for a medical research reactor.

The 20 percent enriched uranium is the source of the greatest concern for the West and Israel, which fear Iran could covertly divert some of it for further enrichment towards weapons grade.

Iran currently has 6,774 kilograms of low-enriched uranium, and nearly 186 kilograms of material enriched to 20 percent, as well as 187 kilograms of the 20 percent material converted to uranium oxide for use in fuel plates.

Iran says it has the right to enrich uranium for peaceful purposes and has defied repeated UN Security Council ultimatums to suspend all enrichment.

A source close to Iran’s negotiators told the official IRNA news agency they would submit to the powers “a clear path” for the talks, and include a timetable and a framework with “specified first and last steps.”

ISNA news agency cited Iranian diplomats as saying “recognition of the right to enrichment on Iranian soil” was the endgame for the talks, not a precondition as in the past.

William Luers, a veteran former US diplomat and director of The Iran Project, an initiative to promote dialogue, said if Tehran came up with a substantive proposal, it could pose a dilemma for Washington, which faces congressional pressure to impose even stiffer sanctions.

“If at Geneva they outline an interesting plan that might go a long way towards satisfying – even over the short term – our concerns, then we’re going to decide whether simultaneously we do something that will make this deal happen,” said Luers.

“Then over the next year or two you can reach a more comprehensive deal.”

EU foreign policy chief Catherine Ashton will represent the powers at Geneva, with both sides under pressure from behind-the-scenes players, namely Israel and hardliners in the Iranian government.

After holding talks with Ashton in London Sunday, US Secretary of State John Kerry said “the window for diplomacy is cracking open.”

“But I want you to know that our eyes are open, too,” he added in his comments to the American Israel Public Affairs Committee via satellite from London

“When we say that Iran must live up to its international responsibilities on its nuclear programme, we mean it…. I believe firmly that no deal is better than a bad deal,” Kerry said.

Israel has been urging the West to intensify its sanctions, and has warned it is ready to go it alone with military action against Iran’s nuclear facilities if it believes Tehran is making progress towards a weapons capability.

And Rouhani has faced some criticism from hardliners opposed to his overtures to the West, including his historic telephone conversation with US President Barack Obama in September.

For now, Rouhani appears to retain the qualified support of Iran’s supreme leader Ayatollah Ali Khamenei, who has the final say on all matters of state.

Khamenei has branded nuclear proliferation and possession of the bomb a “sin” against Islam, in a religious decree acknowledged by Obama, but the supreme leader also deeply distrusts the West.

The Geneva talks are likely “to be more open, but also more complicated,” a Western diplomat close to the process told AFP on condition of anonymity.

“Zarif will, of course, make an ambiguous offer,” the diplomat said, adding that it remains to be seen if the offer “would be something acceptable, (as) we know that it is the supreme leader who decides on the strategy and the margins of manoeuvre.”