Enriching lives: New library to broaden vision of those who cannot see

Enriching lives: New library to broaden vision of those who cannot see 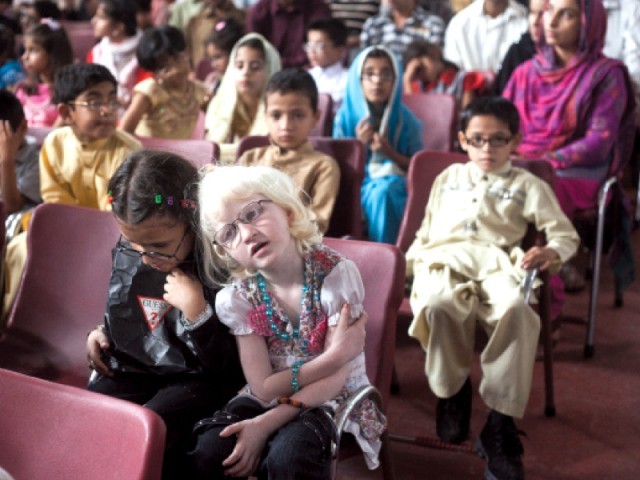 Visually-impaired children enjoying a performance at their school on Thursday. PHOTO: EXPRESS

Tucked away in one of Islamabad’s oldest neighbourhoods, the Al-Maktoom Special Education Centre has been paving opportunities for blind children since 1982.

The school’s corridors were aglow with infectious excitement this morning as students peered into a blue-carpeted room, ripe with the promise of untold stories. Al-Maktoom’s 300 pupils might not be able to see but their curiosity has no bounds, a fact endorsed by the author of Amai books, Fauzia Minallah who recognised the need for a special library to showcase her cloth-bound, tactile narratives of hope and happiness and open the windows of imagination through Braille-transcribed tales and reference books.

“The response has been inspiring,” shared Minallah, who previously collaborated with the centre in building a handicap-friendly park nearby and has, on several occasions, engaged the students in tactile art-related activities. “It is rare to see such a supportive government establishment,” she said.

The three-decade-old institution enrols students for free and a parent-teacher association ensures that students who cannot afford uniforms, books or treatment are provided for.

“The stigma of disabilities keeps reluctant parents from sending their children to special schools,” said Kausar Afza, who has been a vocational teacher at the institute since 1983. “On my first visit to the centre, I came across only five children,” she said.

If the statement proves anything, it is the fact that despite some improvement, the number of parents who send their children to the school on a regular basis still remains low. “A number of parents don’t even educate themselves about their children’s disability and the best they can do is to show up at functions,” she revealed.

Meanwhile, Noreen Bibi, who came from Chakwal to visit her eldest son Nalain, said the institute was blessing. Two of her three children suffer from blindness.

“I visit my 12-year-old every few months. There is no school in our village to accommodate the visually impaired so he lives in a hostel here. After shuffling between regular schools in his hometown, he is a few grades behind,” she stated with a quiet resignation. Initially exasperated with her son’s visual impairment, Noreen, who took four years to find a conducive environment for her son, is now at ease.

Nazima Khattak, a graduate from Al-Maktoom, returned to the school to teach in order to give back. Transcribing stories narrated to her by a young niece, she filled her summer afternoons with the resolve to pass meaningful tales she had heard to students. Decorated with stickers, her books line the shelves of the new library.

The show stealer was the performance of a talented group of musicians, singers and performers. Ayub Bobby led a choir consisting of a rubab, flute, Congo drums and piano, providing cues to the talented and, at times, nervous participants whose spirits were raised by the audience’s thunderous applause.

Even as the crowd thinned out, 14-year-old Sami remained on stage, enjoying the melodious tunes of his flute. “It has just been a few months since I started,” he said excitedly, “There is so much to learn.”

For the institute’s principal Rubina Anjum, the library will help develop greater reading skills and improve Braille writing. Books that enhance the imagination are both expensive and hard to find in Pakistan.

“Although evolving for those with special needs, work environments are still unfriendly and lack of sensitivity makes assimilation a challenge for our students,” she said.