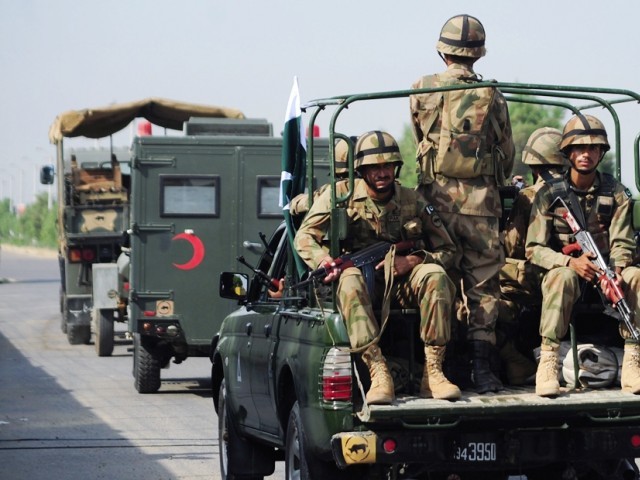 Troops ride to areas in Balochistan affected by an earthquake in military trucks in Karachi on September 25, 2013. PHOTO: AFP

MASHKAI: Two army soldiers were killed and two others sustained injuries in a landmine explosion while they were carrying out relief work in Mashkai, Balochistan on Wednesday, Express News reported.

The landmine was planted on the roadside and exploded when the soldiers were busy in relief work.

This is not the first instance when violence has come in the way of relief work.

On September 27, militants fired on a helicopter carrying relief goods to Mashkai.

The helicopter of National Disaster Management Authority (NDMA) Chairman Major General Muhammad Saeed Aleem was also targeted with rockets on September 26, while it was on its way to Mashkai for earthquake relief work. Major General Aleem remained unhurt in the attack.

The first earthquake had hit Balochistan on September 24, killing at least 350 people and injuring hundreds more.

Another 7.2-magnitude quake furthered the damage when it struck the area on September 28.

A senior FC officer had said that most of the stricken places in Awaran are highly risky areas for relief workers and provincial functionaries as it is a hub of Baloch nationalist militants.

Mashkai – a sub-district of Awaran – has been under the militant command of nationalist guerrilla commander, Dr Allah Nazar who has been confronting the FC and Pakistan Army for a long time.