Suicide attack aftermath: Protesters out in force on streets

Suicide attack aftermath: Protesters out in force on streets 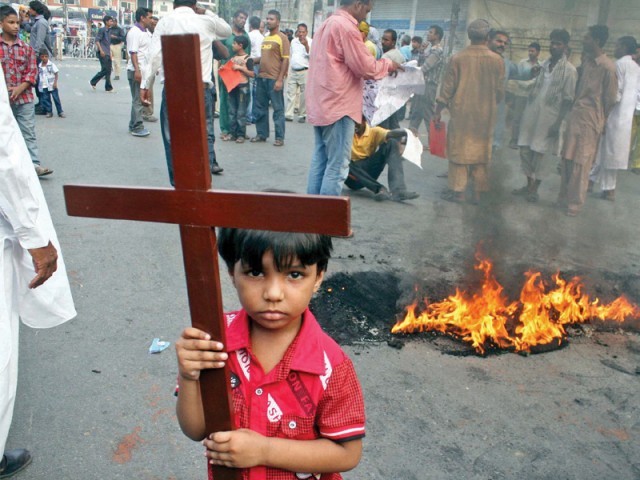 Christians across the country demonstrated against the violence that consumed more than seventy innocent lives, rallying for minorities’ protection. PHOTO: PPI

Indignant, and at places violent, protests erupted in many cities of the country as enraged people took to the streets following the brutal suicide attacks at the All Saints’ Church in Peshawar.

The Christians in Peshawar staged protests at the GT Road, blocking it for hours three times, intermittently. Staging a sit-in, the protesters put on the road the coffins of the victims, which were later removed on the instruction of the leaders of the community.

Angry mob chanted slogans against the provincial and federal governments, and hurled stones at vehicles on the road.

Another unruly mob attacked the Lady Reading Hospital (LRH), breaking the windowpanes of the emergency section.

In Karachi, the protesters blocked Shahrah-e-Faisal, Shahrah-e-Pakistan and University Road. They burnt tyres and blocked the traffic.

The protestors clashed with the police who tried to disperse them and restore traffic. Over a dozen suspects were detained by the police for causing a law and order situation.

In Lahore, large number of protestors, carrying placards and banners, poured on the roads. They blocked the traffic and burnt tyres. Later, they stormed the central track of the metro service, and this forced the bus service to suspend operation.

In the twin cities of Rawalpindi-Islamabad, hundreds of people staged massive protests at different locations. They were holding banners and placards with inscriptions demanding arrest of the culprits.

In Quetta, the Masihi Qaumi Ittehad (MQI) members launched a protest at the main Kansi Road. They burnt tyres and blocked the traffic.