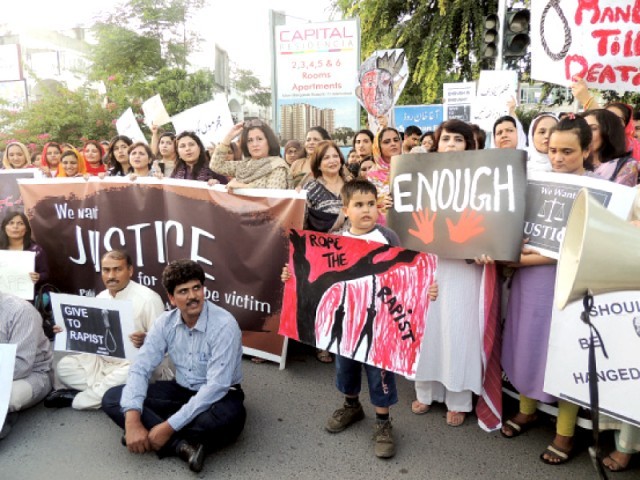 Civil society activists continue to express outrage at the shocking number of paedophilia cases that have surfaced in various parts of the country over the past four days.

In connection with this, a huge demonstration at F-6 Markaz was held on Monday, where the Pakistan Gender Coalition and women’s groups came together to protest against the rape of a minor girl in Lahore. Chanting slogans, the civil society organisations demanded the immediate arrest, prosecution and conviction of the rape’s perpetrators.

Terming rape a crime against the state and society, they also urged the survivor’s family to remain strong and not be pressured to accept an out-of-court settlement or compensation through the police or perpetrators’ influence.

They pledged to continue their protest and raise their voices against inhumanity until the federal and provincial governments took action to urgently enact pending child protection laws, which include meting out maximum punishments of life-long imprisonment without parole, remission or pardon for rape convicts.

They demanded the release of the missing video clips of the Ganga Ram Hospital’s security cameras and strongly condemned the wilful destruction of valuable forensic, chemical and DNA evidence, including the survivor’s clothes.

The activists didn’t stop short of apportioning blame on the media. They called on the electronic media in particular to devote five per cent of airtime to public service messages to raise awareness and sensitise viewers to change entrenched societal perceptions of and attitudes towards women and children, particularly girls.