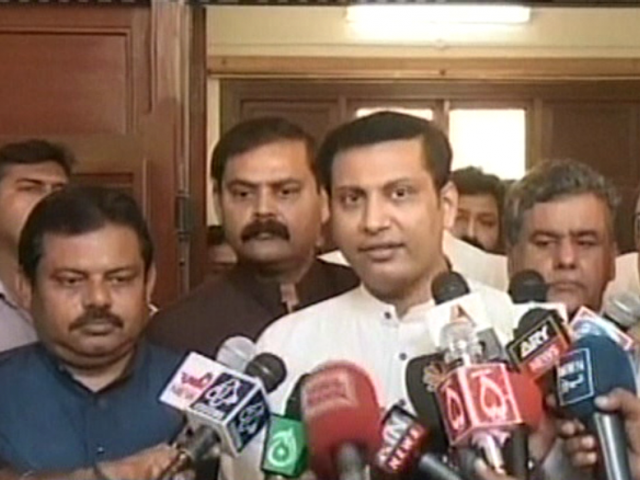 Speaking during a press conference, Sabzwari said the MQM had not said anything against the Rangers’ operation before this despite the arrests of over 100 workers in the last six days.

He claimed that instead of going after criminals, the Rangers were targeting innocent members of MQM.

Hashmi was arrested by the Hyderi police in a raid on his house in North Nazimabad late Tuesday night. A few hours before his arrest, two policemen, Iqbal Arif and Mohammad Ali, were gunned down within the Hyderi police remits.

An FIR, No. 181/13, was registered under Sections 302 and 397/34 of the Pakistan Penal Code and Section 7 of the Anti-Terrorism Act. However, it is said that the police have no evidence of Hashmi’s involvement in the murders.

Hashmi was serving as the incharge of the MQM’s North Nazimabad unit. Before that, he had been elected as a Sindh Assembly member in the by-polls held following the death of MQM leader Dr Mohammad Ali Shah.

Earlier, the offices of MQM leaders Rehan Hashmi and Jamal Ahmed were raided and LCD TVs, computers and fax machines were seized.

Sabzwari said that MQM had supported the targeted operation as they believed that it would entail a political action against criminals, but this is not the case.

“The security forces should rough up real criminals the way they are treating MQM members and offices,” Dr Sagheer Ahmed said while addressing a press conference today.

He questioned where the security forces were when the citizens of Karachi were being killed.