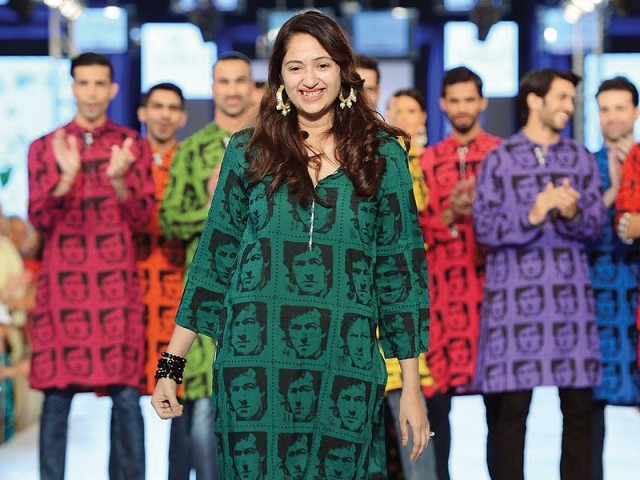 Following the triumph of her Imran Khan kurta, Maheen has put herself on the map. PHOTO: FILE

Still basking in the light of the success of her Imran Khan kurta, designer Maheen Kardar Ali has paid homage to Bollywood through a new and original design for a kurta. “I have been a huge fan of Indian film actors and Bollywood remains famous even across the border,” she said.

“In this tribute to Bollywood, I have carefully hand-picked 30 legendary actors and collated all into one design,” says Maheen. The actors featured in the design include Amitabh Bachchan, Madhuri Dixit, Meena Kumari, Shahrukh Khan, Dev Anand, Rajesh Khanna and Ranbir Kapoor among others.

Maheen, who is known particularly for her exquisite bridals, has offered a lot of variations in bridal jumpsuits for her latest collection, aiming to restore time-honoured elements and bridal accessories. Other than conformist ghararas, anarkalis and lehengas, Maheen’s collection will also include wedding gowns.

“India and Pakistan are nations which love colours and are not afraid to wear them. We also love embellishments. At the heart of it all, we all want to look like spectacular maharanis on our wedding [day], something which binds the two nations together,” she says. Bridal couture, however, differs amongst the two nations. While brides in India seem to stick to the traditional red for their weddings, Pakistani women are very fond of experimenting with colours.

“Fashion is about revival. Nothing really goes away, it keeps coming back and evolves with time. Importantly, fashion must be functional. And all my designs have a flair for the dramatic in them,” says the designer, whose label Karma introduced contemporary in Pakistan. Under the label Karma, she has also introduced the concept of Mini Me.

“With Mini Me, mothers can dress up their daughters on wedding ceremonies and other festivities. The designs displayed here are a mix of modern and contemporary clothes with hints of Islamic patterns. Its long kurtas with ghararas and shararas and colours like black and white, unheard of in the Indian bridal wear lines are something we have set to offer in my couture designs,” says Maheen.

While talking about India’s flourishing film industry, the popular designer says “I would love to work in Bollywood. And especially dress up Deepika Padukone, Kareena Kapoor and my all time favourite, Madhuri Dixit. All of them are very glamorous and pull off designs beautifully,” she says.

When asked what her style statement was, the designer pointed out that lip colour and shoes are evergreen style statements for women. “Pair up a beautiful lip colour with a white shirt, denims and a good pair of shoes, it immediately elevates the look,” says Maheen, who counts Audrey Hepburn, Marilyn Monroe, Elizabeth Taylor and Meena Kumari amongst her style icons.