A college with a heart: Landikotal college refuses to ‘abandon students’

A college with a heart: Landikotal college refuses to ‘abandon students’ 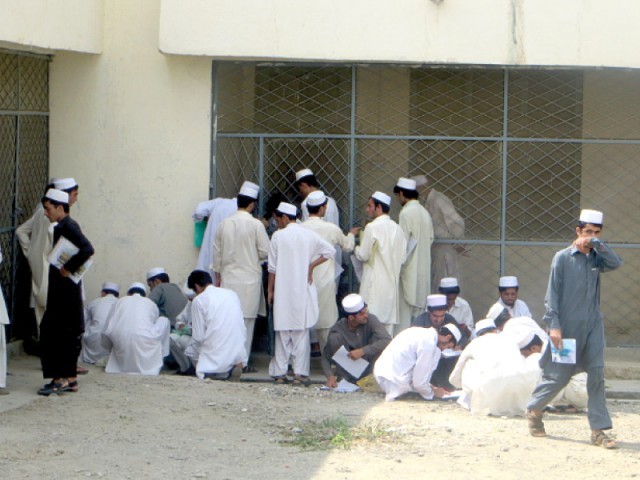 In a first, more than 800 students applied for the 270 available seats at Government Degree College for Boys (GDC), Landikotal in Khyber Agency.

All applicants were eligible according to the admissions criteria, Principal Ghaniur Rahman told The Express Tribune. However, even students on the merit list had to be turned down due to lack of space, he added.

Rahman said the admissions committee has whittled the list down to 455, in spite of the 270 seat quota.

Seats were given to applicants on a first come, first served basis. The additional 185 students will also be attending classes, but will not have a clear admission status till the college figures out how to officially accommodate them.

The college staff has asked the 455-strong intake to start attending classes from September 2.

Wondering about the future of the unsuccessful applicants, Rahman noted it is a first for the region to have such a large number of students interested in pursuing further education. “It’s a clear indication the young generation wants to get educated.”

Shah Muhammad, the head of the admissions committee, explained there was more to the dilemma. The GDC has a quota for 27 teachers but it retains 23 – 13 on basic pay scale (BPS)-17, seven on BPS-18 and three teachers on BPS-19. At the moment, only 20 teachers are on duty while three are on extended leave.

Lacking seven teachers, Muhammad wonders whether the current faculty would be nearly enough to teach the intake.

The greater obstacle, however, might be finding space and time for the 185 extra students the college has decided to admit. “We cannot abandon these students; we know if we don’t give them admission, their career plans would go to waste,” said Muhammad.

The only solution Muhammad foresees is permission from the political administration to start an evening shift.

Government Degree College, Landikotal had originally set the last date of submissions as August 31; after the overwhelming response, it stopped accepting admission forms on Monday.

Had the college continued to accept forms, Muhammad estimates the number of applicants would have easily crossed 1000.

“If someone wants to get an education, how can we stop them,” said the head of the admissions committee.

What dreams may come

Asadullah, a resident of Khuga Khel, secured 893 marks out of 1,150. With those grades, he knows he could have been accepted at Government College Peshawar, but cannot afford the living costs.

One of the 185 students with an uncertain future at the college, Asadullah is the first in his family to have even stuck through till the SSC exam. His father is employed as a Nato container driver and is already pressuring him to follow suit.

“If I don’t get admission I will have to become a driver, the only thing which can save my future is to get this admission,” said the student with a hopeful glint.

Naik Muhammad received 901 marks in his SSC exam, but his name was not on the list of quota seats. He says most of his family members supply goods at Torkham border.

“I always wanted to become a doctor and if I want to achieve that, I cannot continue to work at the border – even though my father has beaten me up several times for that.

“Our parents think education cannot change this society and people from this region can only dream of becoming a doctor or an engineer, but I have come here to prove them wrong,” said the aspiring doctor.

Saleemullah, a social activist focusing on education, says most parents are not aware of how well or how poorly their children do in their exams. “They just want their children to be part of the family business – be it smuggling goods across the border, militancy, transport, supplying goods for Nato or pushing vending carts.

If the young generation is pushing to change their de facto trajectory, argues Saleemullah, the political administration should be bound to start the second shift at the college. Landikotal Assistant Political Agent (APA) Abdullah maintains he was unaware there were so many applicants. With plans to visit the college soon, the APA claims he will try to accommodate all 455 students and provide adequate funding. “I will do everything necessary for these students. If they want to bring change I am with them.”