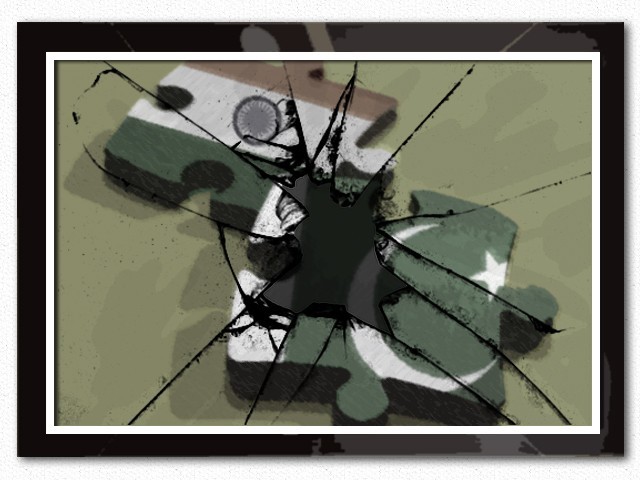 Pakistani artists were quick to condemn the attack by Hindu extremists on an art gallery in Ahmedabad showcasing the work of Pakistani and Indian artists. But their Indian counterparts were not.

Members of Bajrang Dal, an extremist youth organisation, ransacked the Amdavad Ni Gufa Art Gallery and destroyed the collection of paintings by 11 Pakistanis and six Indians to ‘protest’ against the alleged Line of Control (LoC) ceasefire violations by Pakistani troops and the killing of Indian soldiers.

Soon after the incident was reported, an official condemnation email titled ‘Aman ki Ashes’ was sent out by Gallery 6, the Islamabad art house that put up the collaborated show with the Amdavad Ni Gufa. The incident condemned far and wide in Pakistan – but things were quiet on the Indian front.

“They [Indians] proclaim to uphold art in high esteem. But there has been no strong criticism of the vandalism. It should have been vociferously condemned,” veteran Pakistani artist Shakil Saigol tells The Express Tribune.

Shakil’s exhibition in India is scheduled for early next year but he may change his mind. “I am seriously considering not going,” he says. “I don’t want my work destroyed.”

But Saigol is still more disappointed about the “lack of condemnation” from India. Sameera Raja, curator of Karachi’s Canvas Gallery, agrees. “If this horrible incident had taken place in Pakistan, the world would have been up in arms, calling us extremists with no concept of culture or art,” she says, adding that the Pakistani art community fiercely condemns the act of intolerance. “I suppose people are more accustomed to the ‘shining’ side of India. International agencies should condemn it too.”

For Raja, the silence is upsetting. “Maybe their art fraternity is facing a situation we do not know about,” she is forced to conjecture.

Citing the expulsion of New York Times journalist Declan Walsh from Pakistan, she says that India is not as “generous” when it comes to accepting responsibility and issuing apologies, in comparison to Pakistan.

According to Lahore-based artist RM Naeem – whose paintings were destroyed in the attack – the silence shows the difference in approaches between the two neighbours. “Why will India show a bad face to the world? They are cashing in on ‘Incredible India’. It is our media that is unchecked.”

But regarding the collaborated art shows, he said their purpose was to initiate peace. “Serious action should be taken against those trying to uproot that process.”

When contacted by The Express Tribune, leading Indian contemporary artist Anjolie Ela Menon confesses that she was not aware of the incident. “I never even heard about it,” she admits, adding that she is currently in Bangalore and perhaps would have known if she had been in Delhi. “I am absolutely shocked! I don’t think it appeared in our newspapers.”

“I am very keen on keeping the people-to-people contact alive no matter what politicians do. Artists are not really concerned with this ongoing cold war,” she adds.

One of their own

Hindu extremists Bajrang Dal are known to be the youth wing of the Vishwa Hindu Parishad (VHP). However, it has emerged that Ravindra Maradia, the organiser of the art show that was attacked, happens to be a VHP member himself.

Maradia, a Mumbai-based industrialist, told the daily, “I know Bajrang Dal would not do such a thing. It looks like the work of some hooligans who wanted attention.”

Nine VHP activists have been reportedly arrested after the incident. But the group’s general secretary Pravin Togadia has condemned their arrest on Twitter. “Opposing Pak artists’ exhibition in Ahmadabad when Pak [is] killing our army: a crime? Bajrang Dal, VHP workers picked up by police for votes!” Togadia says in his tweet, calling the art initiative “Aman ki Aasha, Chaman ki Barbaadi”.

The most recent attack is Amdavad Ni Gufa Gallery’s third such incident. In 1996, Bajrang Dal members destroyed dozens of tapestries and paintings by renowned Indian artist Maqbool Fida Husain because of his controversial depictions of Hindu deities.

A decade later, the gallery was vandalised a second time by a Hindu extremist group for another of Husain’s paintings. The gallery was previously known as Hussain Doshi Gufa.