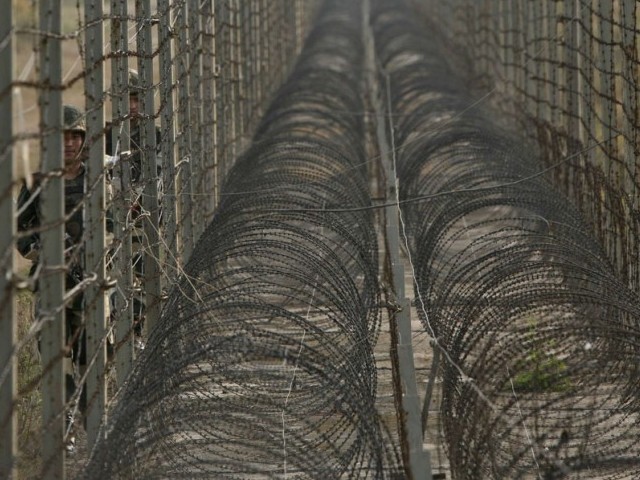 The LoC, that serves as a de-facto border between India and Pakistan. PHOTO: REUTERS/FILE

ISLAMABAD: The Foreign Office spokesperson said on Thursday that the incident of the Line of Control (LoC) violation by India earlier in the day was a continuation of many others that have occurred over the past two weeks, were a matter of grave concern for Pakistan, The Ministry of Foreign Affairs stated.

“We call upon India to take steps to ensure that there are no more ceasefire violations or other provocations so that the cause of peace in the region is not undermined,” said the spokesperson.

Pakistan was following a policy of restraint, responsibility, and dialogue in the larger interest of peace in the region, the statement said. However, the people of Pakistan, the leadership and its institutions were fully capable of defending Pakistan territory and its interests, it added.

“We called in the Indian Deputy High Commissioner to register our protest and convey our concern.”

“While desire for peace by the leadership of Pakistan was a wise approach, it is important for India to better appreciate Pakistan’s policy of restraint and responsibility and not construe it as a weakness.”

“The government of Pakistan believes that the dialogue process must continue. Suspending the dialogue or slowing it down does not serve the peace process. In fact it helps those elements who do not wish to see peace in our region,” the spokesperson said.

On asked how the relations between the two neighbours could improve, the spokesperson said that there was a need to build confidence so that there were no further misunderstandings.

“The offer of the Prime Minister of Pakistan to use the occasion of the UN General Assembly next month to hold a meeting with the Indian Prime Minister can provide an opportunity to discuss the steps needed to reduce tensions, build confidence and improve relations,” the spokesperson said.

“Another option is the operational aspect of it. There are existing mechanisms which ought to be used optimally to address the issue of ceasefire violations. The Prime Minister of Pakistan has even offered that if the Indian side feels that these mechanisms are not sufficiently robust, then we are ready to discuss the ways to further strengthen them. Apart from the bilateral mechanisms, UN Military Observer Mission (UNMOGIP) is also there to observe the line of control.”

On the meeting of Prime Minister Nawaz Shairf and Prime Minister Manmohan Singh on the sidelines of the UN General Assembly in New York in September New York, he said that the FO did not have the exact dates or confirmation about the meeting.

FO spokesperson said that Pakistan had investigated India’s claim over the killing of five Indian soldiers in cross border firing from Pakistan on August 6, and found that Pakistani side was not involved.

“We have conveyed that to the Indian side. It is for the Indian government to investigate what happened on its side.”

“Pakistan which itself has been suffering from terrorism cannot be held responsible for any acts of terrorism that may have happened on the other side of the line of control,” the spokesperson said.

On Afghanistan President Karzai’s forthcoming visit to Paksitan, the statement said that the high level interaction would provide an opportunity for the leadership of the two countries to carry forward the process of constructive engagement between the two countries.

“The two sides will work together to promote the shared objectives of peace and security in our region. Matters relating to peace and reconciliation in Afghanistan, bilateral relations and regional situation will be focus of discussions during the visit,” the statement said.

“The government of Pakistan would continue to extend its support for the peace and reconciliation process in Afghanistan. In that regard, whatever steps that we deem are helpful will be taken.”

“We support an Afghan led and Afghan owned peace process,” the spokesperson said.

On the current conflict going on in Syria, the FO stated that it had expressed Pakistan’s position in the United Nations Security Council where Pakistan is currently a member.

More than 100,000 people have been killed in Syria’s 29-month-old war, the UN says, and millions more have been displaced.