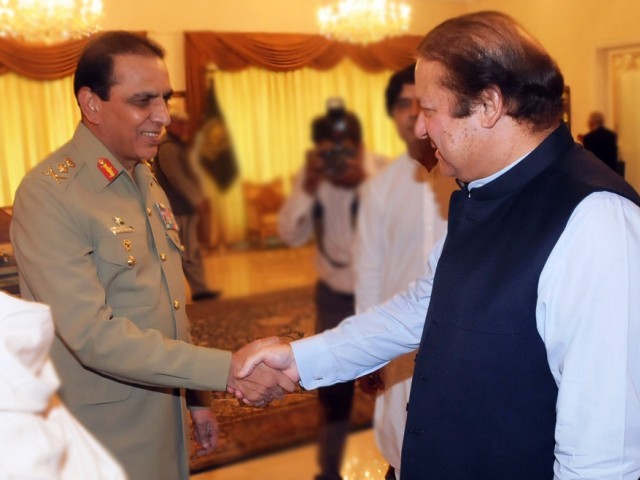 Sources disclosed that Prime Minister Nawaz Sharif, during the recent meeting with the army chief, made it clear that his government did not want any escalation of tensions along the LoC. AFP/FILE

Pursuing a policy of rapprochement, Prime Minister Nawaz Sharif on Tuesday instructed diplomatic and military officials to observe restraint during ongoing tensions with India over violations of the ceasefire agreement in the disputed region of Jammu and Kashmir.

According to official sources, the prime minister also directed the foreign ministry to avoid getting bogged down in a blame game with India in the wake of recent rhetoric emanating from New Delhi.

In his maiden televised address to the nation, the prime minister once again sounded a note of conciliation when he reiterated his policy of reaching out to Pakistan’s immediate neighbours, including India.

The caution demonstrated by the premier has also trickled down to the military, which has stopped issuing statements on LoC violations following directives of the premier.

This was visible during the address of army chief Ashfaq Parvez Kayani at Pakistan Military Academy on the eve of Independence Day celebrations, when he refrained from making any comments on the LoC violations by India.

“He could have used that address to convey a message to India but because of the government’s policy of restraint, he did not do so,” said a military source.

Sources disclosed that Prime Minister Nawaz Sharif, during the recent meeting with the army chief, made it clear that his government did not want any escalation of tensions along the LoC.

The restraint, from all quarters in Islamabad, comes amid rising incidents of unprovoked firing by India and a steady stream of allegations by its officials against Pakistan.

On Monday, Indian Defence Minister A K Anthony, warned Pakistan that his country was running out of patience with alleged repeated ceasefire violations at the Line of Control (LoC).

However, official sources told The Express Tribune that the government had decided, in principle, not to respond to such allegations. “Our assessment is that most of these rhetorical statements coming from India are linked to their domestic political situation,” commented a foreign ministry official.

The official, who asked to remain anonymous, added that the government had taken the right approach to avoid getting involved in such ‘unnecessary war of words’ with India. “We cannot afford another front. There is lot of wisdom in government’s policy of restraint and responsibility,” said the official.

Seeking a detailed briefing on escalating tensions with India, the premier has now called a meeting of the Cabinet Committee on Defence (DCC) on Thursday. Sources added that director general of military operations is expected to brief committee members on the August 6 incident which sparked the recent crisis along the Line of Control (LoC).

During the meeting, the prime minister is expected to approve measures to defuse tensions with India, sources further added.

However, a Foreign Office source revealed that an opportunity for stalling rising tensions may soon present itself.

According to the sources, Nawaz would call for de-escalation of tensions during his expected meeting with his Indian counterpart Manmohan Singh next month, on the sidelines of the UN General Assembly session in New York.

India reportedly has informed the US that it is ready for the summit meeting between Manmohan and Nawaz, despite LoC tensions.