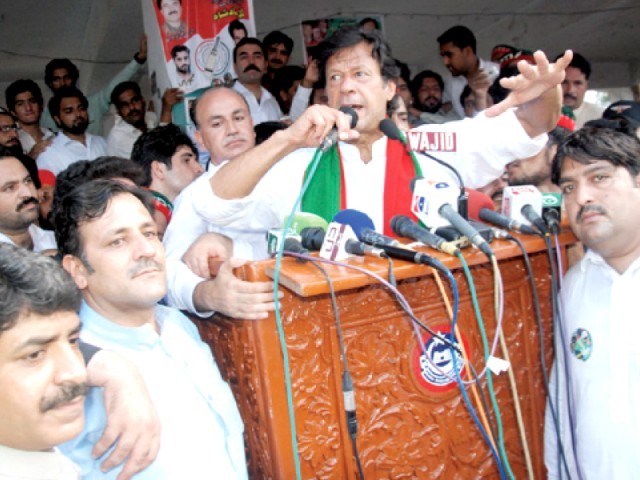 Imran Khan asked supporters to turn out in the same numbers as they did on May 11. PHOTO: EXPRESS

In a public address attended by a relatively small group of people, Pakistan Tehreek Insaf (PTI) chairman Imran Khan urged the people of Khyber-Pakhtunkhwa (K-P) to show the same support in the by-elections as they did on May 11.

Nearly 2,000 people were present for his speech at the Tamash Khan Football Ground in Shahi Bagh, Peshawar on Sunday.  This is the same football ground where Imran delivered his first speech after winning the general elections from the NA-1 constituency.

“I thank the people of Peshawar who voted for me and made me win with a large majority. Now I urge you to vote for Gul Bacha, a loyal worker of the PTI who has been associated with the party since 17 years,” he said.

He informed the PTI government has laid the groundwork for some necessary legislations and it’s a matter of weeks before people see the change. “The process of change will first begin from Peshawar.”

“We will soon be bringing in the accountability act to ensure transparency and eliminate corruption,” he said.

The party chairman pledged to bring foreign investment to K-P, which he said will create countless job opportunities in the province. “As soon as investors know there is a transparent accountability system in place, investment will start pouring in.”

Further discussing his party’s performance during the 75 days in power, Imran said all necessary work has been done to implement a uniform education system. To provide basic health facilities to people with low-income families, we will soon be providing free medicines to patients in government hospitals, he added.

While he promised to establish sports stadiums in every tehsil of the province, he did not comment on the deplorable state of the Tamash Khan Football Ground, which has been closed for sports activities since many years.