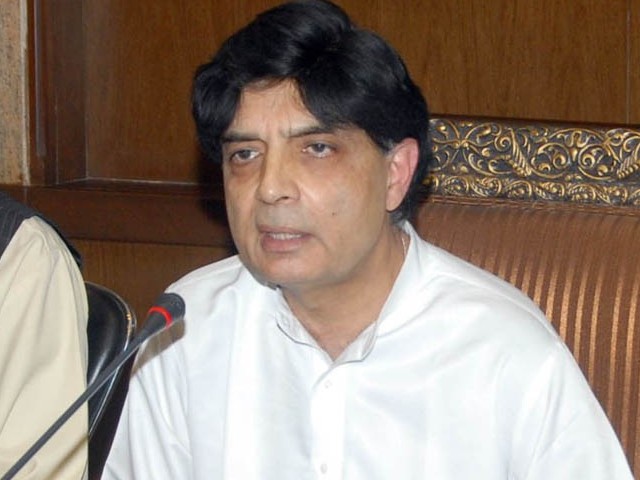 “After receiving the initial report [of the incident], we have suspended the officials responsible for maintaining the security cordon around the gunman Sikandar,” he told a news conference at the Pakistan Muslim League-Nawaz’s central secretariat.

He announced that the government has also constituted a high-level interior ministry committee to determine which officials from the senior cadre can be held responsible for the incident and recommend further suspensions. He added that the committee would submit its report within 48 hours.

On Thursday, gunman Sikandar Hayat, along with his wife and two children, brought life on Islamabad’s Jinnah Avenue to a standstill for five hours. The standoff ended after Zamurd Khan, who breached the cordon around Sikandar, attempted to take down the gunman unsuccessfully, prompting police snipers to incapacitate the latter.

“We do not doubt Zamurd’s intentions, but his step was unwise,” Nisar told reporters on Friday. “He tried to capture the gunman singlehandedly without considering possible consequences… fortunately for him Sikandar’s second gun did not fire.”

When asked if Zamurd will face any action for interfering in government business, the interior minister said the government had no intention to do so.

Nisar said the initial report had raised several questions regarding the way the standoff was handled.

“Why was the area where the incident took place not isolated? Why was an unplanned operation carried out? Why was neither the Islamabad IG nor the interior secretary present at the scene?” he said.

When asked about how Sikandar managed to stray so close to Islamabad’s red zone with two firearms, Nisar said Islamabad police could not search every car in the capital. He said policemen deployed at check posts visually assess all vehicles for any possible threat.

He, meanwhile, criticised the media’s role in the incident.

“The government had asked the media for a 15-minute window to allow police officials to resolve the situation, but that never happened… to make matters worse, certain channels started interviewing Sikandar.”

Nisar also said negotiations with Sikandar were almost complete before Zamurd intervened and brought about a messy conclusion to the incident.

Separately, Nisar condemned the firing at the offices of Express Media in Karachi and said he sought a report from intelligence agencies on the matter.