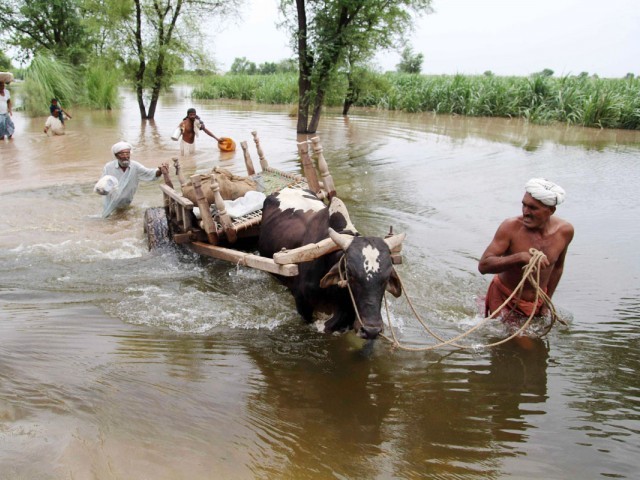 Flood affected villagers wade through floodwaters as they evacute their homes at Sadat Wala near Multan on August 16, 2013. PHOTO: AFP

The National Disaster Management Authority (NDMA) has warned that heavy rains in the next one and a half month could submerge central parts of the country and tri-juncture of Sindh, Balochistan and Punjab.

The NDMA Chairman Major General Muhammad Saeed Aleem on Friday indicated that the country’s eastern rivers – Satluj and Chenab may overflow due to “above than normal rains”. He was speaking in a meeting convened here in the planning and development ministry to seek updates on the floods situation and the preparedness of the disaster management authorities.

Maj Gen Aleem said the Bakhar district could be worst affected in Punjab while in Balochistan, Dera Allah Yar may again be in danger due to faulty planning by the National Highway Authority (NHA).

He said heavy spells of rains were expected in the next ten days and this may affect the same parts of the country, which were adversely affected in the last three floods.

“Despite having lost $16 billion in the last three consecutive floods, there has been no investment in flood prevention,” Maj Gen Aleem said adding that the NDMA has prepared a 10-year National Disaster Management plan, which has also been approved by the prime minister’s office.

He said the plan covers the entire spectrum of disaster management, early warning systems and prevention but remains unimplemented due to lack of funding. He said the total funding requirements were Rs113 billion.

Aleem said rescue responsibilities are of the provinces and “there are gaps in capacity of many district management authorities.” He said Punjab and Khyber Pakhtunkhwa were good in rescue operations while Sindh and Balochistan lacked facilities, adding that in coming days, risks of high floods were there at Qadirabad, Chashma and Taunsa. He said in case of likely heavy rains scenario, the NDMA would need Rs16.2 billion for relief activities.

Planning and Development Minister Ahsan Iqbal, who chaired the meeting, said that the federal government wanted to minimise damages due to expected heavy rains. He said there was need to improve coordination with the provincial governments.  While giving an update about weather forecasts, Met officials also said that more than normal rainfalls were expected in August and September. Meanwhile, Federal Floods Commission Chairman Asjad Imtiaz said there was no threat to Mangla dam, which was still 20 feet below its full reservoir capacity but heavy rains could cause problems and Kabul River may flood Nowshera, he added.