In the line of duty: DIG Fayyaz Sumbal laid to rest in Lahore

In the line of duty: DIG Fayyaz Sumbal laid to rest in Lahore 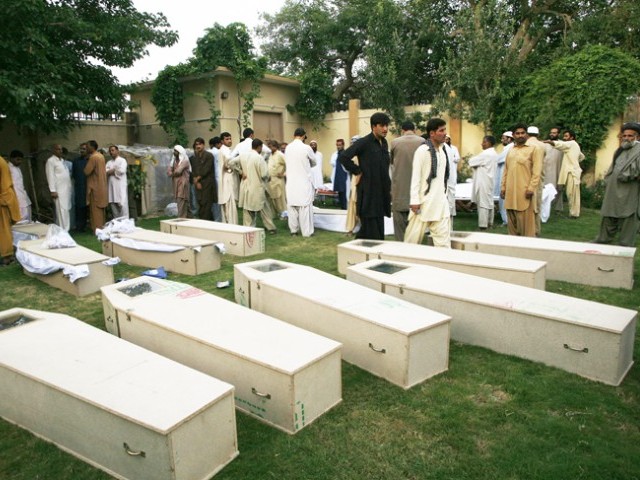 Relatives and colleagues gather near the caskets of victims killed in a suicide bomb attack before funeral ceremony at a police headquarters in Quetta August 8, 2013. PHOTO: REUTERS/FILE

LAHORE: Deputy Inspector General Operations Fayyaz Sumbal, who, along with a number of senior police officers, was killed in a suicide bombing at a funeral in Quetta, was laid to rest in his hometown of Lahore, on Friday, Express News reported.

DIG Sumbal the most senior police officer deputed in Quetta, along with a number of police officers were attending the funeral of SHO Mohibullah, who was gunned down just hours before in Quetta. Just as the officers had gathered to pay their last respects to their colleague in the maximum security Police Lines, a Tehrik-e-Taliban Pakistan suicide bomber blew himself up, killing over 30 people and injured over 40 others.

On Friday, Eid day, Sumbal’s body was flown to Lahore for the last rites.

His funeral prayers were offered at the Elite Police Training centre, before being laid to rest at the Wapda Town graveyard.

Sumbal’s brohter-in-law noted after the funeral prayers that the slain officer was very brave and had always reassured his family that the situation was not that bad in militancy-hit Quetta.

CCPO Lahore and DIG Operations along with other senior officers attended the funeral prayers.