Countering terrorism: PM vows to use ‘iron fist’ against terrorists

Countering terrorism: PM vows to use ‘iron fist’ against terrorists 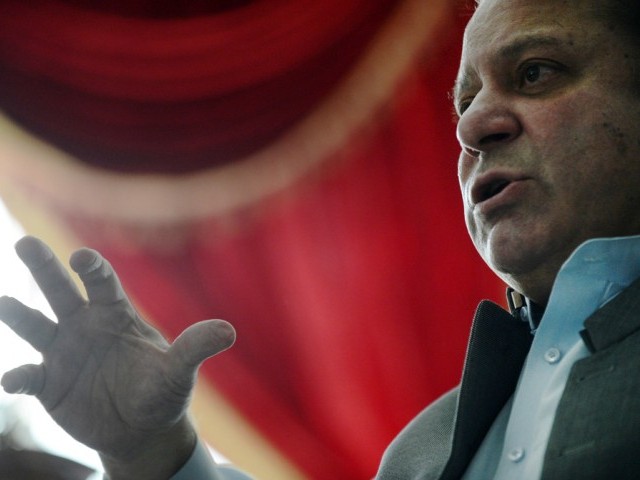 “The government cannot leave the country to be a playing-field of terrorists. We will be handling them with an iron fist,” says Prime minister Nawaz Sharif. PHOTO: AFP

Prime Minister Nawaz Sharif on Thursday vowed to take on terrorists with an iron fist hours after a suicide bombing killed at least 30 people at a policeman’s funeral in Quetta.

“The government cannot leave the country to be a playing-field of terrorists. We will be handling them with an iron fist,” Nawaz said, while urging officials to present a draft of the Counter Terrorism Strategy by August 13.

The prime minister also directed the interior minister to reach Quetta at the earliest to show solidarity with the people.

In a detailed discussion over the security situation with Chaudhry Nisar Ali Khan, the premier expressed his views that the counter terrorism strategy would play a vital role in enhancing the role of security agencies in countering terrorism and it should therefore be implemented soon.

Nawaz also asked the interior minister to submit a detailed report on the Balochistan situation once the latter returns from the province.

Meanwhile, lauding the courage and commitment of law enforcement agencies across the country, Nawaz asked Nisar to ensure all help to the families of the martyred and injured.

The prime minister also acknowledged the services of DIG operations Balochistan Fayyaz Sumbal and all those who laid down their lives in the line of their duty. “Their sacrifices will not go in vain and the perpetrators of the blast will be brought to book at any cost”.

The premier directed the interior minister to remain in constant contact with the provincial security authorities and asked him to meet the security personnel in person to boost their morale.

He directed the provinces and the federal government to devise a security plan.

In a statement issued by the Prime Minister’s Office, the provincial governments are directed to inform the federation over security measures being taken on Eid. It also asked the provinces to inform if federal law enforcement agencies were needed to maintain peace in the cities.