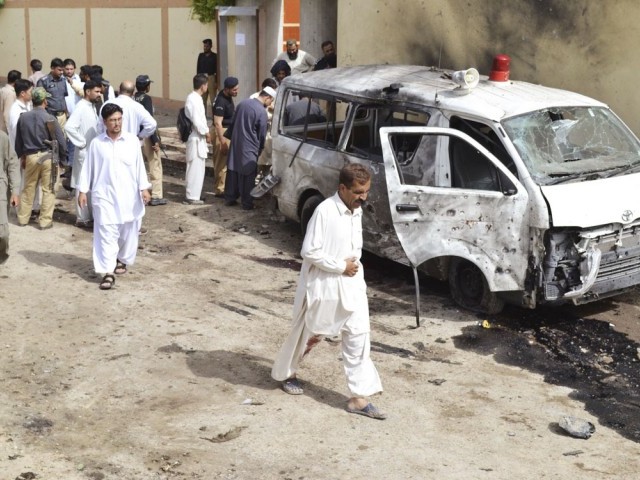 Security officials gather at the site of a suicide bomb attack in Quetta August 8, 2013. PHOTO: REUTERS

QUETTA: A suicide bomber killed 30 people including Deputy Inspector General Operations (DIG) Fayyaz Sumbal and Deputy Superintendent Police (DSP) Shamsur Rehman at the funeral of a policeman in Quetta on Thursday  in the third deadly attack on government targets in two weeks.

The blast took place just before the funeral prayers of SHO City Mohib Ullah – killed during a firing incident in Alamu Chowk, Quetta – commenced at the Police Lines mosque.

Provincial chief secretary Babar Yaqoob Fateh Mohammad confirmed that at least 30 people were dead and 62 wounded. 21 of the dead are known to be police officers. Others are yet to be identified, though the victims are said to include children.

“They are not Muslims. They are not humans,” said Inspector
General Mushtaq Sukhera. “We have no other option but to fight against terrorists. We have made sacrifices and we will continue to do so and we will not bow down.”

The funeral was attended by around 300 to 400 people, including the top police officials of the area. While DIG Operations and DSP died on the spot, IG Balochistan and CCPO survived the attack.

The police immediately cordoned off the area and rescue operation was started. Injured were shifted to the hospital.

A member of the bomb squad said that the suicide bomber was wearing a jacket packed with ball bearings and shrapnel. He tried to enter the mosque where senior officers lined up to offer prayers for their colleague.

On being stopped by police, the bomber detonated his explosives just outside the mosque, several witnesses said.

It was not yet clear how the bomber had passed through several other layers of tight security.

Prime Minister Nawaz Sharif condemned the attack and ordered instant aid for the victims. He also called the Balochistan chief minister and sought a report on the blast.

Meanwhile, the Tehrik-e-Taliban Pakistan have claimed responsibility for the attack.

Imperative to ‘ensure and restore ceasefire on LoC’: Nawaz