Wikileaks: Manning guilty of espionage but not 'aiding enemy'

Wikileaks: Manning guilty of espionage but not 'aiding enemy'

Mannin­g could face a jail term of upto 100 years for the 20 charge­s of violat­ing the espion­age act.
By AFP / Reuters
Published: July 30, 2013
Tweet Email 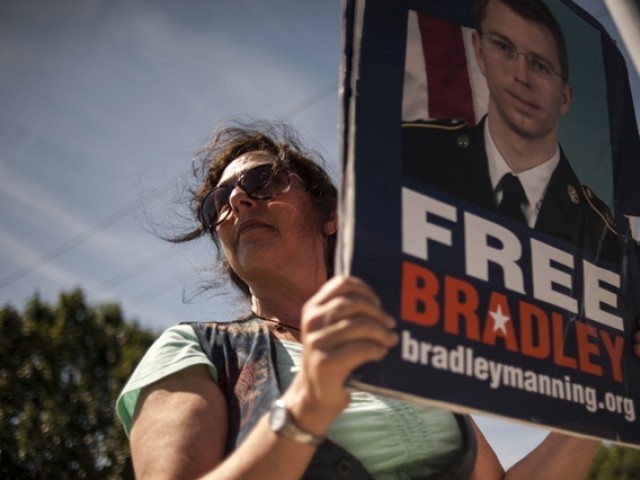 A supporter of US Army Private First Class Bradley Manning protests outside the main gate before the reading of the verdict in Manning's military trial at Fort Meade, Maryland July 30, 2013. PHOTO: REUTERS

FORT MEADE, MARYLAND: A US military judge found Wikileaks’ source Private Bradley Manning guilty of several counts of espionage on Tuesday but cleared him of the charge that he ‘aided the enemy’ – the most serious charge he faced for handing over documents to WikiLeaks.

The judge found him guilty of most of the other 20 criminal counts in the biggest breach of classified information under the espionage act in the nation’s history. He could possibly face 100 years in jail for the charges he was found guilty of.

The US government was pushing for the maximum penalty for what it viewed as a serious breach of national security.

Despite being cleared on the most serious charge, Manning will still face a lengthy prison term for his breaches of the espionage act when a sentencing hearing begins Wednesday.

A crowd of about 30 Manning supporters had gathered outside Fort Meade ahead of the reading of the verdict.