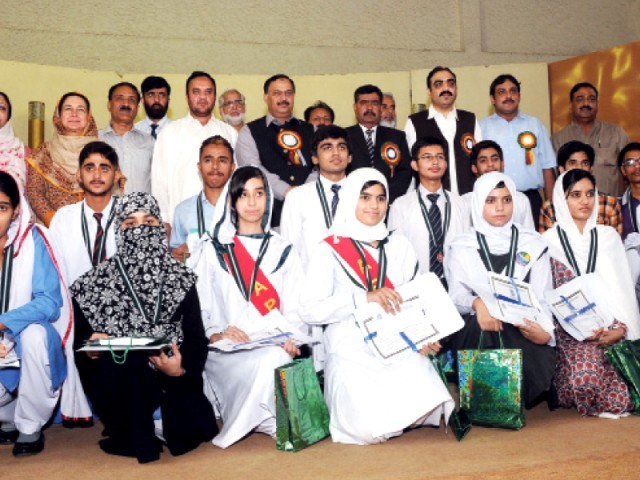 Position holders pose with their medals and board officials on Thursday. PHOTO: EXPRESS

A girl outshone boys in the secondary school certificate examinations by clinching the first position.

The Board of Intermediate and Secondary Education (BISE), Rawalpindi announced the Secondary School Certificate (SSC) result on Thursday with a pass percentage of 60 per cent.

Amna, speaking on the occasion, said she managed to come first through sheer hard work and concerted efforts.

“This is the happiest moment of my life,” she said. “I knew I would secure a position, but just wasn’t sure about coming first.”

Amna said she studied around 10 hours daily for the exams and would like continue her higher studies in the field of information technology.

In the Matric General group (Girls), Saba Namal, of the Grammar Public High School, stood first. Saba said her parents supported her despite their meagre means. Her father, Jan Muhammad Sheikh, who is a welder, said he was extremely happy about his daughter’s achievement and would support her higher education with his hard-earned money.

Ashraf said there is an education war in the world today and the country which succeeds in the field of education will succeed at everything.

“A nuclear bomb is no longer a guarantee for a country’s security, but education is,” he said.

Sohail said the top 10 position holders will get free education and the next 10 will get a 15 per cent tuition waiver.