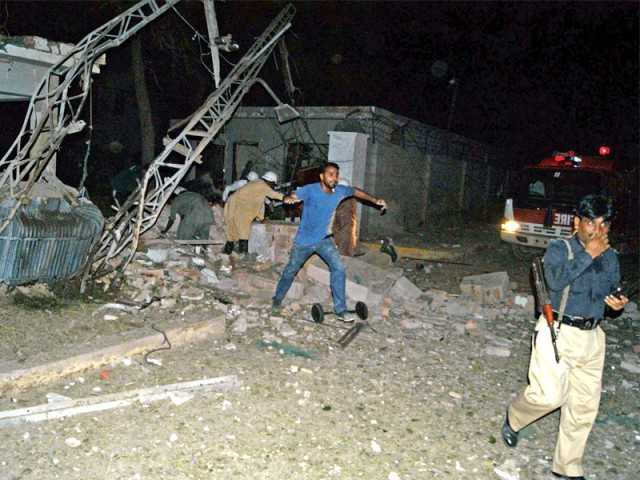 Policemen and rescuers at the site of suicide attack in Sukkur. PHOTO: AFP

PESHAWAR: The death toll has risen to nine from a suicide car bomb attack on ISI office and police living quarters in Sukkur, officials said Thursday.

The dead include five attackers, and four police and intelligence officials, a spokesman for the paramilitary Rangers told AFP after the attack late Wednesday in the normally sleepy town.

Officials had previously put the death toll at seven, saying Wednesday that the five attackers, one intelligence agent and another government official had been killed.

“We rounded up several people on Wednesday night after the attack and are interrogating them,” the Rangers official said.

An intelligence official told AFP that the attack had destroyed the local branch of the ISI and damaged newly-constructed residential quarters for police officers.

It was the worst attack in Pakistan during Ramazan so far.

Officials blamed militants for Wednesday’s attack, confirming that they do have a presence in the Sukkur area.

Police said the attackers stormed the complex as people were eating after sundown, detonating two bombs outside the police building and the ISI office.