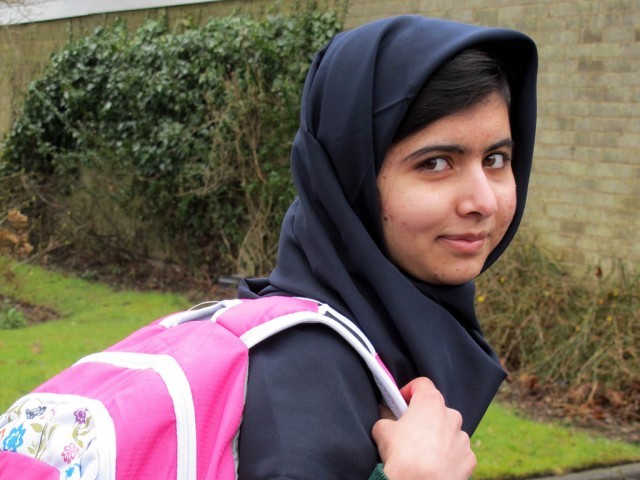 Rashid was also one of the many inmates who escaped from Bannu jail in April last year.

He wrote to Malala a day after her address at the United Nations General Assembly, criticizing her speech in his two-page letter written in English.

Rashid said that he had written to Malala in his personal capacity and not as a member of Tehreek-e-Taliban Pakistan (TTP) or any other group.

“I advise you to come back, adopt the Islamic and Pushtoon culture, join any of the female Islamic madrassas near your home town, study and learn the book of Allah, use your pen for Islam to bring the plight of Muslim ummah to light and to reveal the conspiracy of the tiny elite who want to enslave humanity for their own evil agendas in the name of new world order,” he wrote.

Rashid has featured regularly in videos released by the Taliban and in a recent video he was seen training Taliban fighters to attack Musharraf, before openly threatening him on camera.

He rejected Malala’s assertion that she was targeted by the Taliban and claimed that he was shocked when the attack happened.

Malala, along with her friends was shot at point-blank range when her school van traveled through Swat last year.

“When you were attacked, it was shocking for me. I wish it [the attack] would never have happened,” Rashid wrote.

“First of all, the Taliban never attacked you because of going to school or because of the fact that you were an education lover. The Taliban or Mujahideen are not against the education of any man or woman,” Rashid wrote to Malala.

“Taliban believed that you were intentionally writing against them and running a smearing campaign to malign their efforts to establish an Islamic system in Swat. Your writings were provocative,” he continued.

Claiming that Malala wasn’t attacked because of her cause of education, he said “thousands of girls had been to school and college before the Taliban insurgency in Swat, would you explain why you were the only one on the hit list?”

Rashid said that Taliban were not the only ones blowing up schools but the Pakistan Army and Froniter Constabulary was as much to blame for it.

He said that the schools were being blown up so they can be used as hideouts and transit camps.

A copy of the letter, dated July15 has been received by The Express Tribune.

IN THE NAME OF ALLAH THE MOST MERACIFULL AND BENEFICEINT

From Adnan Rasheed to Malala Yousafzai

I am writing to you in my personal capacity this may not be the opinion or policy of Tehreek e Taliban Pakistan or other jihadi faction or group.

I heard about you through BBC Urdu service for the first time, when I was in bannu prison, at that time I wanted to write to you, to advise you to refrain from anti-Taliban activities you were involved in. but I could not find your address and I was thinking how to approach you with real or pseudo name, my all emotions were brotherly for you because we belong to same Yousafzai tribe.

Meanwhile the prison brake happened and I was supposed to be in hiding. when you were attacked it was shocking for me I wished it would never happened and I had advised you before.

Taliban attacked you, was it islamically correct or wrong, or you were deserved to be killed or not, I will not go in this argument now, let’s
we leave it to Allah All mighty, He is the best judge.

Here I want to advise you as I am already late, I wish I would have advised u in my prison time and this accident would never happened.

First of all please mind that Taliban never attacked you because of going to school or you were education lover, also please mind that Taliban or Mujahideen are not against the education of any
men or women or girl. Taliban believe that you were intentionally writing against them and running a smearing campaign to malign their efforts to establish Islamic system in swat and your writings were provocative.

You have said in your speech yesterday that pen is mightier than sword, so they attacked you for your sword not for your books or school.

There were thousands of girls who were going to school and college before and after the Taliban insurgency in swat, would you explain why were only you on their hit list???

Now to explain you the second point, why Taliban are blowing up schools? The answer to this questions in that not only Taliban in KPK or FATA are blowing up the schools but Pakistan Army and Frontier Constabulary is equally involved in this issue. The reason for this action is common between them that is turning of schools into hide outs and transit camps once it comes under control of either party Pakistan Army or Taliban.

In 2004 I was in Swat, I was researching on the causes of failure of the first revolution attempt by Sufi Muhammad. I came to know that FC was stationed in the schools of swat in tehsil Matta and FC was using schools as their transit camps and hid outs. Now tell me who to blame???

Dozens of schools and colleges are being used by Pakistan Army and FC as their barracks inFATA, you can find out easily if you like. So when something sacred is turned lethal it needs to be eliminated this is the policy of Taliban.

Blowing up schools when they are not using strategically is not the Taliban job, some black sheep of local administration may be involved to extract more and more funds in the name of schools to fill their bank accounts.

Now I come to the main point that is EDUCATION, it is amazing that you are Shouting for education, you and the UNO is pretending that as you were shot due to education, although this is not the reason, be honest, not the education but your propaganda was the issue and what you are doing now, you are using your tongue on the behest of the others and you must know that if the pen is mightier than the sword then tongue is sharper and the injury of sword can be hailed but the injury of the tongue never hails and in the wars tongue is more destructive than any weapon.

I would like to share with you that Indian sub-continent was highly educated and almost every citizen was able to read or write before British invasion. Locals used to teach British officers Arabic, Hindi, Urdu and Persian. Almost every mosque was acting as school too and Muslim emperors used to spend a huge sum of money on education. Muslim India was rich in farming, silk, and jute and from textile industry to ship building. No poverty, no crises and no clashes of civilization or religion. Because the education system was based on noble thoughts and noble curriculum.

I want to draw your attention to an extract from the minute written by Sir T.B Macaulay to British parliament dated 2nd February 1835 about what type of education system is required in Indian sub-continent to replace the Muslim education system.

He stated “We must at present do our best to form a class who may be interpreters between us and the millions whom we govern, –a class of persons Indian in blood and color, but English in tastes, inopinions, in morals and in intellect”

Why they want to make all human beings English? because Englishmen are the staunch supporters and slaves of Jews. Do you know Sir Syed Ahmed Khan, the founder and symbol of
English education in India was a freemasons.

You have given the example that once a journalist asked a student that why a talib afraid of this education he replied a talib didn’t know what was in this book. The same I say to you and through you to whole world that why they afraid from the book of Allah because they don’t know what is in it.

You have talk about justice and equality from the stage of and unjust institution, the place where you were standing uttering for justice and equality, all the nations are not equal there, only five wicked states have the veto power and rest of them are powerless, dozens of time when all the world untied against the Israel only one veto was enough to press the throat of justice.

The place you were speaking to the world is heading towards new world order, I want to know what is wrong the old world order? They want to establish global education, global economy, global army, global trade, global government and finally global religion. I want to know is there any space for the prophetic guidance in all above global plans? Is there any space for Islamic sharia or Islamic law to which UN call inhumane and barbaric?

You have talk about attack on polio team, would you explain why the then American foreign secretary of state Henry Kissinger, a Jew, said in 1973 to reduce the third world population by 80%.Why the sterilization and eugenics programs are running in different countries in one way or another under the umbrella of UNO. More than 1 million Muslim women have been sterilized in Uzbekistan forcibly without their consent.

Bertrand Russell writes in his book the impact of science on society, “diet, injections and injunctions will combine, from a very early age, to produce the sort of character and sort of beliefs that the authorities consider desirable and any serious criticism of power that be will become psychologically impossible”. This is why we have the reservation on so called polio vaccination program.

I ask you and be honest in reply, if you were shot but Americans in a drone attack, would world have ever heard updates on your medical status? Would you be called ‘daughter of the nation? Would the media make a fuss about you? Would General Kiyani have come to visit you and would the world media be constantly reporting on you? Would you were called to UN? Would a Malala day be announced?

More than 300 innocent women and children have been killed in drones attacks but who cares because attackers are highly educated, non-violent, peaceful Americans.

I wish, the compassion you learnt from Prophet Muhammad peace be upon him should be learnt by Pakistan Army so they could stop shedding of Muslim blood in FATA and Baluchistan. I wish, the compassion you learnt from Prophet Jesus should be learnt by USA and NATO so they should stop shedding blood of innocent Muslims across the world and I wish the same for followers of Buddha to stop killing of innocent unarmed Muslims in Burma, and Sri Lanka and wish the same for Indian army to follow Gandhi jee and stop genocide in Kashmir, And yes, The followers of bacha khan, the ANP has an example of non-violence in their five years regime in KPK province, for example Swat, where a single shot was not fired and we witnessed the followers of bacha khan implemented the philosophy of nonviolence in its true soul, with support of jets, tanks and gunships.

at the end I advise you to come back home, adopt the Islamic and pushtoon culture, join any female Islamic madrassa near your home town, study and learn the book of Allah, use your pen for Islam and plight of Muslim ummah and reveal the conspiracy of tiny elite who want to enslave the whole humanity for their evil agendas in the name of new world order.

All praises to Allah the creator of the Universe.