11 children ‘forced’ into begging rescued by Docks police from Gizri

11 children ‘forced’ into begging rescued by Docks police from Gizri

Karach­i Docks police conduc­t a raid at the kidnap­pers’ hideou­t in Upper Gizri.
By Our Correspondent
Published: July 17, 2013
Tweet Email 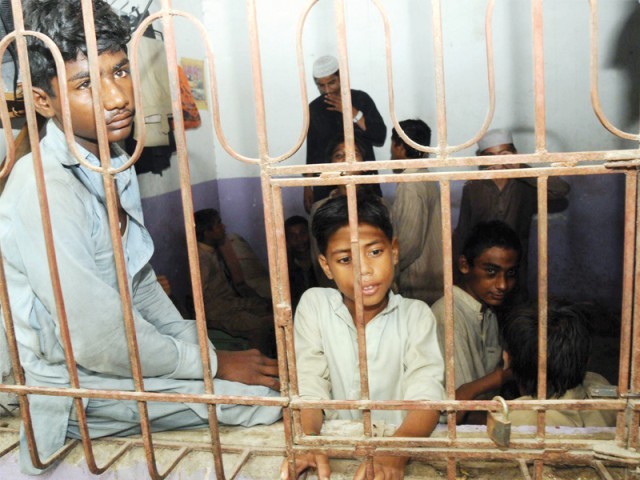 The Karachi Docks police conducted a raid at the kidnappers’ hideout in Upper Gizri and rescued 11 children who were allegedly being forced to beg for money. PHOTO: EXPRESS

KARACHI: Karachi is no stranger to beggars and in Ramazan, they appear to multiply in number – especially the young ones. In an attempt to make sure that young children were not being exploited to earn money, the Karachi Docks police busted a gang of kidnappers and claimed to have rescued 11 under-aged kids who were being forced to beg.

The children, aged between eight and 15 years, reportedly hail from different regions of the country and were kidnapped from Punjab and parts of Sindh. According to police officials, the children were kidnapped specifically for the purpose of making them beg in Ramazan.

The police came to know about the gang after Ramesh, the father of one of the children, Naveen, complained to them. Following the complaint, a suspect, Amir, was arrested and based on the information he provided, police conducted a raid at the kidnappers’ hideout in Upper Gizri. The police, however, were unable to locate Naveed in their raid.

The children rescued by the police accused the kidnappers of beating them. “They (the culprits) would often beat us and force us to beg,” said the children. “They even tortured us if we failed to earn more than Rs500 daily.”

In an attempt to defend himself, Amir said that the children were not kidnapped. “We admit that we use children for begging but we are not involved in human trafficking or kidnapping,” said Amir. “These children wanted to join us and were gathered from the railway stations and footpaths.”

For their part, the police have started a campaign against children being used for begging while further investigations were also being carried out. “We believe that there are more such groups who use children for this business,” Docks Police SHO Asif Jakhrani told The Express Tribune. “The campaign will continue throughout the month.”