Fading traditions: When was the last time a drummer woke you up?

Fading traditions: When was the last time a drummer woke you up? 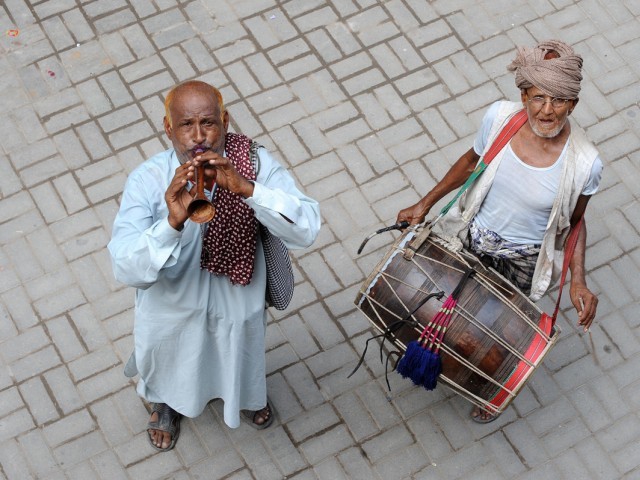 “The tradition of drummers in cities has nearly vanished. It is barely surviving in small villages or neighbourhoods where people sleep on terraces and can easily hear a shout from the street,” says a drum beater. PHOTO: Express/File

FAISALABAD: “All our lives the men of my family have been waking up the faithful for the Ramazan fast. Now I am the only one left. Everybody else has given up,” says Shaukat Ali, a drum beater, from a village near Faisalabad.

Ali is one of a very small number of men who voluntarily go around at sehar waking people up with the resounding vibration of their drums.

The tradition is centuries old. It goes back to times when there were no loudspeakers and no alarm clocks for people to rely on. Shortly before Fajr prayers, the drummers, also known as dholchis, walk about in the streets beating the drums and shouting and calling the people to wake up and prepare for a fast.

They are respected as pious people doing a job to receive God’s blessing. The respect also beings money, gifts and food at Eid.

But with advancements in technology, many of the traditional drummers believe they are not wanted any longer.

For Ali that doesn’t make a difference. He works at a power loom factory, but says his “religious commitment” keeps him returning to the streets every Ramazan.

He says his father, uncles and brothers are no longer as consistent as him.

There used to be three drummers in his village, he said. His wife and mother used to collect alms as he beat the drum along with his brother.

“Now people don’t treat the drummers as good people the way they did earlier. We keep shouting to wake them up, but receive no acknowledgement,” he adds.

He says sometimes some people shout back at him, telling him to leave. Some, he said, take him as a nuisance.

But, there are still people who respect him and others like him for their consistency.

“Some offer me iftar and tell me to remember to visit them on Eid day to collect my Eidi.”

Ali says he has grown up seeing his father and uncles collect Eidi and gifts of clothes and food. He says he regrets his children will not see it.

“The tradition of drummers in cities has nearly vanished. It is barely surviving in small villages or neighbourhoods where people sleep on terraces and can easily hear a shout from the street,” he says.

Muhammad Qasim, one of his former colleagues, says dholchis once adorned market squares in cities and villages, where shortly before sunrise and sunset people would gather to hear them recite the Holy Quran, naats and hamds.

He says the tradition has come to an end as people now wait instead for sirens, and broadcast azan and use electronics for alarms.

“How can anybody, even if he is shouting at the top of their voice, be heard with the sirens and hooters around?” he asks.