Warning to Russia: Snowden asylum could imperil ties, says US

Warning to Russia: Snowden asylum could imperil ties, says US

US-born fugiti­ve says he would seek tempor­ary asylum in Russia and then move to Latin Americ­a.
By Agencies
Published: July 13, 2013
Tweet Email 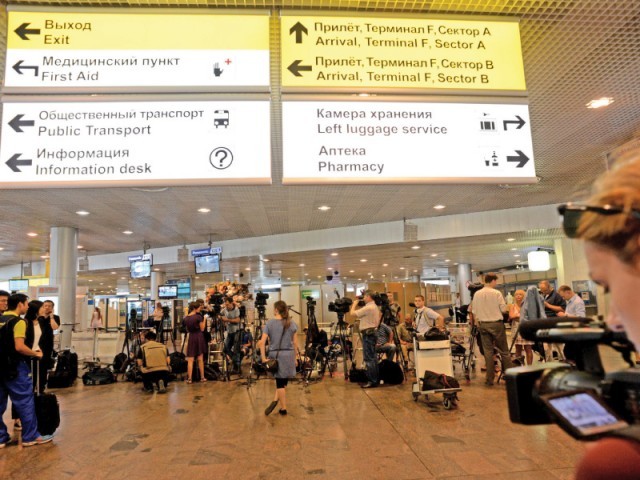 Journalists crowd inside the terminal F of Moscow’s Sheremetyevo airport, where US National Security Agency fugitive leaker Edward Snowden reportedly remains without making any contact with the swarm of international reporters. PHOTO: AFP

The US State Department warned Russian authorities on Friday that if Moscow accepted an asylum request from fugutive Edward Snowden, it would raise concerns in the US-Russian relationship.

“There is no question that, as we have stated broadly with any country that would have a role in assisting him either in transit or in a final place for him to live, that that would raise concerns in our relationship,” department spokeswoman Jen Psaki said.

“However we are not at that point yet. They still have the opportunity to do the right thing and return Mr. Snowden to the United States and that’s what our hope is.”

US President Barack Obama was expected to speak with Russian counterpart Vladimir Putin late on Friday, the White House said, hours after Snowden said he would seek temporary asylum in Russia.

US officials voiced unhappiness at Russia making it possible for Snowden to meet with rights groups in Moscow, saying it had provided him with a “propaganda platform.”

“We are disappointed that Russian officials and agencies facilitated this meeting today by allowing these activists and representatives into the Moscow airport’s transit zone to meet with Mr. Snowden despite the government’s declaration of Russia’s neutrality with respect to Snowden,” said the State Department spokeswoman.

Snowden has nor regrets

Snowden said on Friday he had sacrificed a comfortable life in disclosing US. spying secrets but had no regrets.

“A little over one month ago, I had family, a home in paradise,” he said in first public remarks on what he sees as the personal cost of incurring Washington’s anger in disclosing details of US electronic surveillance programmes.

“I also had the capability without any warrant to search for, seize, and read your communications. Anyone’s communications at any time. That is the power to change people’s fates,” he told human rights activists at the Moscow airport where he has lived since arriving from Hong Kong on June 23.

Russian authorities said he should not harm the interests of the United States if he wants refuge in Russia – a condition set by President Vladimir Putin.

“Snowden is serious about obtaining political asylum in the Russian Federation,” said Vyacheslav Nikonov, a pro-Kremlin lawmaker who attended the meeting with Snowden, who had not been

seen in public since arriving from Hong Kong.

Participants of the meeting said Snowden would seek to travel on to Latin America. It was unclear when that might happen, or how.