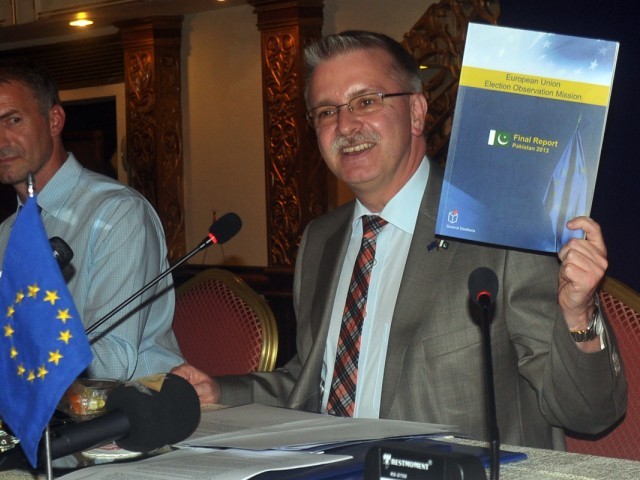 ISLAMABAD: The European Union’s Election Observer Mission, in its final report, has said the May 11 polls were much more free and fair than previous elections in the country. It cautioned, however, that not implementing certain legal provisions has left future elections vulnerable to malpractice.

Released at a news conference on Wednesday, the findings of the EU observer mission concluded that despite escalating militant attacks and procedural shortcomings, the May 11 electoral process progressed with a high level of competition, a marked increase in voter participation and overall acceptance of the outcome.

Speaking to reporters, Chief Observer Michael Gahler, however, noted that fundamental problems remain with the legal framework and the implementation of certain provisions.

“Now is the time for the new Parliament, the Election Commission and other stakeholders to demonstrate their commitment to a democratic Pakistan. Legislation can be further developed and every by-election as well as local election is an opportunity for implementing improved practices,” he added.

The 140-member EU observer mission formulated 50 recommendations to help ensure better transparency in future elections. Of these seven require constitutional changes and 17 require changes in the primary legislation, according to Gahler.

The EU observer mission suggested the formation of a special parliamentary committee on elections to review related legislation within a framework of international law commitments. Key issues to address in this regard include candidacy criteria, transparency requirements and mechanisms for effective remedy.

It also recommended that the Election Commission of Pakistan should take full responsibility for the administration of the elections. The commission must fully implement its five-year strategic plan as well, the EU mission noted in its report.

It proposed that ECP should establish a clear regulatory framework for all aspects of the election, including results management, observation and scrutiny, and complaints. The commission should also review and develop procedures to increase checks in the polling and results process, and develop practices to improve the quality of the completed results forms, the report maintained.

“All polling and results information should swiftly be made available to the public on the ECP website.”

It also suggested that the legal framework for media be revised so that it fully supports editorial independence and eliminates opportunities for censorship.

The EU mission stressed the need for measures to promote the participation of women in the electoral process, through measures such as more Computerised National Identity Card (CNIC) drives, requiring parties to make policies and information on women’s participation within the party publicly available and ensuring greater coverage of women in politics in the state media.

The mission also called for the abolishment of a separate list for Ahmadi voters, so that all voters are on one unified electoral roll.