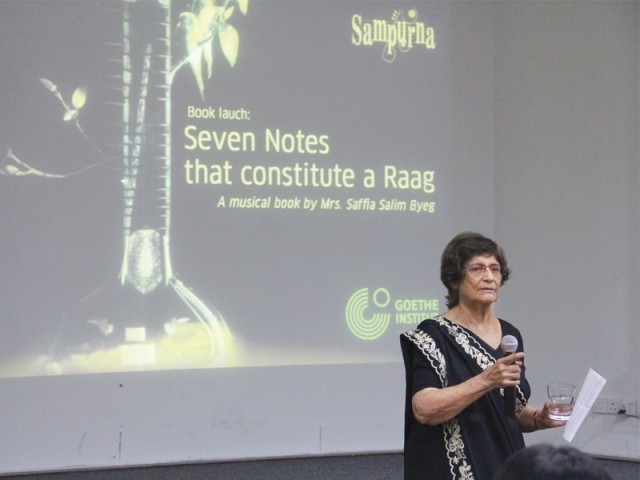 KARACHI: Saffia Beyg, 81, a self-taught musician started her musical journey only after she turned 40, when she discovered eastern classical music.

“I was frustrated because no one accepted me as a student,” she told The Express Tribune. They would all tell her that she’s too old to learn classical music now. Instead of giving up on her passion, Beyg took it is as a challenge and started listening to classical music masters, such as Ustad Amir Khan and Baday Ghulum Ali Khan, and started reading extensively about music.

Popularly known as Saffia Apa, the self-taught musician has quintessential grandma persona – she radiates love and tempts everyone to bask in her affection, listen aptly as she narrates her life stories.

Born in Burma in 1933, Beyg spent her childhood and moved to India during the second World War. She has been living in Pakistan since 1968. “My life started in the British colonial times when music was part of the school syllabus and I grew up singing hymns and musicals.” She discovered Eastern classical music later in life.

Beyg gives credit to Ustad Hamid Hussain, her music teacher for two years for teaching her on Tanpura and Sarangi. She admitted she was never in the limelight as a performer and that her life’s purpose was to preserve classical music. “I am not a religious person or an agnostic or atheist. I see myself as Komal, the flat note which is a constant reminder of my nothingness.”

Beyg has devoted decades of her life to promoting and teaching musicians. She was part of the now closed Academy of Performing Arts in Karachi, as well as, Sampurna where musicians from the subcontinent gathered to perform music.

The decline of classical music saddens Beyg. These musicians either inherited music from their family or they started learning it independently, she pointed out. “Sadly, in our culture they are branded as mirasi [a derogatory term]. We need to fix this negative attitude.”

Her teaching methods are simple. When she was learning classical music, there were certain aspects that were hard for her to grasp so now when she is teaching she tries to use simpler techniques that she includes in her book as well.

Music is also a visual medium and the students can learn better when they see the connections between music and the universe, she said. “I told my students to catch sounds from the universe and internalise it.”

Beyg is constanly striving to make learning music easier for students. Her book is a desperate act to spread her teaching methods as she didn’t receive support from National Academy of Performing Arts (Napa) and other art institutes to teach and she wants a venue, where she can teach students regardless of their class. “My heart breaks when I realise I am unable to teach under-privileged children.” Accepting that she is in the twilight years of her life, Beyg wants to pass whatever she has learned to whoever is seeking. “I really want students to benefit from my musical experience.”  Currently, Beyg is giving private music lessons but she also teaches on Skype to her students in the US and Singapore.

“I don’t believe in borders, music is universal and I want everyone to have an opportunity to learn,” she said. “Let’s unite and do something together as art is our planet’s only salvation.”