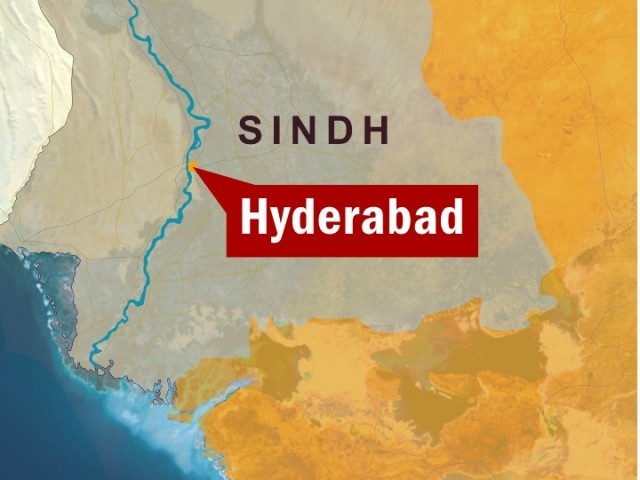 Community members were protesting the killing of five men on June 7.

HYDERABAD: The Solangi community blocked Hyderabad’s National Highway on Monday to protest over the killing of five of their men. An attack on the protesters also injured four men.

The community members declared the protests will continue until Chief Justice Iftikhar Chaudhry takes up the issue.

Earlier on June 7, four Solangi brothers – Wali Muhammad, 32 and an employee of Allied Bank, Murtaza, 30, Asif, 22, and Bilawal, 17 – were killed when some men opened fire at them while they were on their way to attend a court hearing. One of their brothers, Zulfiqar, was injured in the firing, but he also died on June 24.

The killings were triggered by a family vendetta between Solangis with Abbasis. The Solangi brothers were accused in the murder case of Ali Abbasi, who was killed in January, in Hussainabad town. Solangis had implicated Ali’s father, Murad Abbasi and 13 other people in the FIR.

During Monday’s protest, the community members set up camps on the bypass and distributed free lunch to hundreds of men, women and children who gathered there as early as 11am. “We will stay here even if it takes a week for the chief justice to take notice,” said Sardar Khalid Solangi, who led the protesters. He complained that the community has held protests and sit-ins in Hyderabad since June 7, when the brothers were killed.

“Each time the police persuaded us to call off the demonstrations, assuring that the killers will be arrested.”

Hussainabad DSP Ayub Durrani, who has been dealing with the case, met the protesters thrice but he failed to satisfy them. “We have arrested two of the 14 suspects and for others we are regularly conducting raids,” he said. However, prime suspect Murad Abbasi has not been arrested so far. Pakistan Peoples Party local leaders also approached the Solangis but they refused to budge. “The enemies have murdered five of my eight brothers and one of our brothers has been put in jail over a fake case,” said Muhamamd Ali Solangi, the youngest brother who survived the June 7 attack.

Meanwhile, two men of Solangis and two others were shot and injured when the Solangis tried to block the adjacent Jamshoro road on the by-pass. The Solangis blamed the workers of a nationalist party for attacking them.