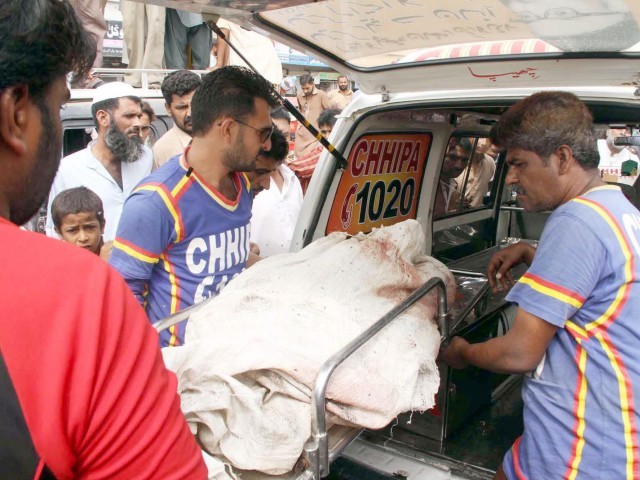 Eighteen people, including five workers of the Muttahida Qaumi Movement (MQM), an activist of the Pakistan Sunni Tehreek (PST) and a police inspector, were killed.

The neighbourhoods of New Karachi, North Karachi, Surjani and Orangi towns were tense after the target killing of MQM joint unit in-charge, Izhar Hussain, on Sunday night in Khwaja Ajmer Nagri police remits. Three PST workers, Arshad K-2, Irfan aka Irfan Chewara, and Furqan, were nominated in the murder FIR but the police have yet to make arrests.

In the aftermath of the incident, armed men opened fire at a grocery shop in Surjani town, where they killed a PST worker, Zahid Qadri, and wounded another worker, Mehmood Qadri. A man identified as Imran was also killed in the exchange of fire. Police officials said that Imran was associated with the MQM.

PST spokesperson Fahim Shaikh claimed, however, that Imran was a target killer. He was trying to flee with his accomplice after opening fire when a bullet fired by the deceased PST worker hit him.

In another incident, ASI Ejaz Khokhar and an MQM worker, Kamran Ahmed, were killed and another MQM worker, Saqib, suffered injuries in Sector 5-L, New Karachi.

The policeman was posted at Khwaja Ajmer Nagri police station.

Bilal Colony police said that two armed motorcyclists shot them when the men were sitting at a milk shop. SHO Changaiz Khan said that it is yet to be ascertained if the MQM workers were the target or the police officer. The bodies and the injured were taken to Abbasi Shaheed Hospital.

Separately, two more MQM workers, Yasin and Majid, were killed and another, Adnan, was injured when armed motorcyclists resorted to indiscriminate fire at the Dabbu club in the Kati Pahari area of Orangi Town. Police said the incident took place over political reasons. The bodies and injured were taken to Abbasi Shaheed Hospital.

The PST spokesman, while talking to The Express Tribune, blamed the MQM for the killing of its worker. “When we increase our political activities, the MQM starts killings our men,” he alleged.

On the other hand, MQM spokesperson denied all allegations against the party and said that it was not involved in any sort of target killings. “Our own men are being killed,” he said. “The culprits should be nominated in the murder FIRs of the MQM men.”

In Lyari, Jalal Baloch was shot dead outside his home in Agra Taj Colony over personal enmity. A watchman was found dead inside a bungalow in Block 2, Clifton. Boat Basin police said that Bashir Aslam was attacked with a sharp weapon on his head and then hanged. Another servant, Shahbaz, was missing since the incident and the police believed that he might be involved in the murder.

Meanwhile, bodies of three men were found in PIB Colony, Napier and Pak Colony. Police said the victims were shot multiple times after being severely tortured. The bodies were moved to Edhi morgue, Sohrab Goth, for identification. An unidentified man was shot dead in Baldia.