Under a MoU, a Chines­e compan­y will setup a medium range power genera­tion projec­t from coal in Punjab.
By APP
Published: July 4, 2013
Tweet Email 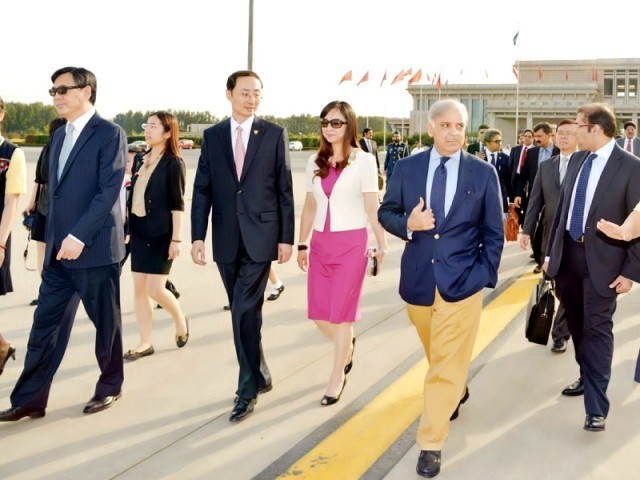 Punjab Chief Minister Shahbaz Sharif arrives at the Beijing Airport, along with other dignitaries. PHOTO: NNI

Chief Minister Punjab Shahbaz Sharif said on Thursday that the cooperation of Chinese authorities and investors in overcoming the energy crisis in Pakistan will strengthen diplomatic relations between the two countries.

He stated this during a series of meetings with the heads of various government and semi-government institutions in Beijing.

The chief minister said there was a vast scope for electricity generation from coal, solar energy and hydro projects with Pakistan.

Shahbaz said that facilities and protection will be extended to investors of energy sector in Punjab and land will be provided to them on soft-term basis for installation of solar system.

He explained that the purpose of Prime Minister Nawaz Sharif’s visit to China was to seek its cooperation in increasing energy production.

“Pakistan does not want aid but friendly cooperation and technical guidance from China,” he added.

He maintained that Pakistanis were a talented nation and he is sure that the country can make rapid progress like China under the dynamic and sagacious leadership of Nawaz.

The chief minister invited the heads of Chinese companies to work on power generation projects in Punjab.

A Memorandum of Understanding (MoU) was also signed between Punjab government and a public sector Chinese company, China Energy Engineering Company in Beijing.

Under the agreement, the Chinese company will setup a medium range power generation project from coal.