A look into who Pakist­an's decisi­on can affect its relati­onship with the United States.
By Reuters
Published: October 1, 2010
Tweet Email 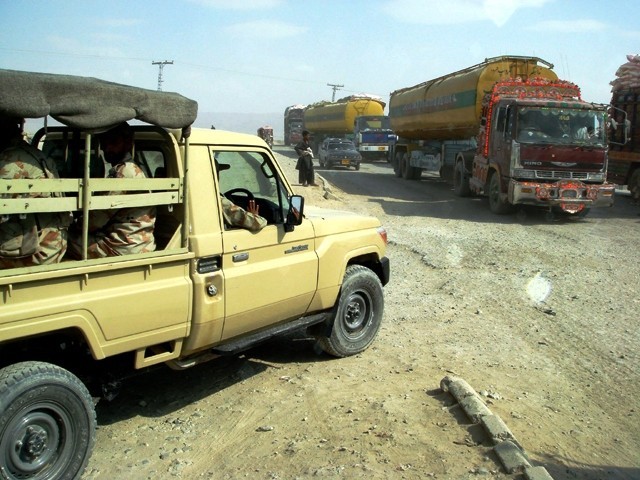 Soldiers stand alongside trucks carrying NATO supplies in the town of Chaman on September 30, 2010. PHOTO: AFP

ISLAMABAD: Pakistani authorities, angered by repeated incursions by Nato helicopters over the past week, have blocked a supply route for the troops in Afghanistan.

Here are some questions and answers on the strategic route, part of a network crucial to US efforts to pacify Afghanistan.

Will this damage the Nato alliance in Afghanistan?

The move pointed to tensions between the United States (US), which leads NATO troops in Afghanistan, and Pakistan, a frontline state in the American war on militancy. Pakistan has said it would consider “response options” if Nato forces continued to violate its sovereignty.

An escalation of drone attacks in September to a record monthly high of 21 since the attacks began in 2008 has made the Pakistanis more sensitive to issues of sovereignty.

But as the strikes from the unmanned aircraft have shown, many issues in the relationship between the US and Pakistan are not black or white and resulting grey areas leave room for compromise, making them easier to work through. Analysts say the operations are dependent on Pakistani intelligence.

Closing the border underscored the leverage Pakistan has over Washington as US troops struggle to contain a raging Taliban insurgency before a withdrawal starts in July 2011.

Pakistan, however, is unlikely to keep the border shut for an extended period, aware that it cannot afford to antagonise an ally which provides $2 billion in military aid every year. Keeping foreign money flowing here may be more important than ever as Pakistan tries to recover from the devastating floods that inflicted billions of dollars in damage.

The relationship between Islamabad and Washington has, in any event, often been fraught with difficulties. The border closure, others have occurred before, is unlikely to hurt ties enough to affect the war in Afghanistan.

Where do the routes pass?

There are two routes through Pakistan into Afghanistan. The one that was closed off goes through the Khyber Pass in the Khyber-Pakhtunkhwa provice to the border town of Torkham and on to Kabul.

That is the easiest land route for supplies and military equipment into Afghanistan, by ship to the Pakistani port of Karachi, and then by truck through Pakistan and into Afghanistan.

The other passes through Balochistan province from the town of Chaman and to the southern Afghan city of Kandahar.

The US military and Nato have given no details of the supplies they get via Pakistan or a breakdown of how much comes on the two routes. The US Defense Department says the US military sends 75 per cent of supplies for the Afghan war through or over Pakistan, including 40 per cent of fuel.

Sensitive gear like ammunition, weapons and critical equipment is flown in, the Pentagon says.

Taliban militant attacks had already forced the United States and other Western forces to look for alternatives through Central Asia and Russia into northern Afghanistan.

The Northern Distribution Network (NDN), as the US refers to it, was launched in 2009. It involves Russia, Latvia, Georgia, Azerbaijan, Kazakhstan, Tajikistan and Uzbekistan.

Also, the United States operates a military air base in Kyrgyzstan which serves as an important support hub for Afghan operations as well as an aircraft refuelling point.